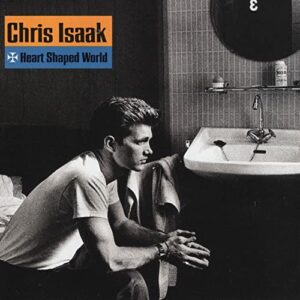 Music can be like fashion, the stuff that used to be popular becomes laughable and then is all the rage again. They use words like ‘vintage’ to make it feel cool again, but with music, you simply know what’s cool when you hear it. Today’s featured artist hit it big decades after his sound was the big thing, but it didn’t limit his success.

Christopher Joseph Isaak was born in Stockton, California in 1956. Mom worked in a potato chip factory and dad was a forklift operator. Chris stayed in Stockton all through childhood, graduating from Amos Alonzo Stagg High School in 1974. He was class president his first three years, culminating in being elected student body president his senior year. He also was the class valedictorian and head of the all-male cheer squad.

After high school, Chris went to a smaller local college before transferring to the University of Pacific, getting his degree in English and communications in 1981. He studied abroad in Japan as well, trying to figure out what he wanted out of life—which turned out to be music. He put together his first band called Silvertone and they played a rockabilly style while traveling around California.

When the band didn’t work out, Chris explored potential solo options. He’d end up signing a deal with Warner Bros. Records in 1985—and named his debut album after his old band as a tribute. The album wasn’t a major seller, but achieved critical acclaim, including a huge nod from megastar John Fogerty.

A follow-up record came out in 1986 with similar results. Feeling he needed a boost, Chris and his label didn’t do any more new albums for a few years and took their time with his third release Heart Shaped World in June of 1989. As with his first couple albums, film director David Lynch took to the singles and used them in various films. Turns out third time was the charm.

An Atlanta radio station music director who was obsessed with Lynch’s films started playing all the Isaak tracks. One off the third album called “Wicked Game” became a monster hit, and one of the most requested songs in America. While it took a bit, the single became a Top 10 hit in both the USA and the UK. The music video that accompanied it was in constant rotation on MTV and VH1 and the track was used in countless television shows, movies and ads.

The album itself would turn out to launch Isaak into a new stratosphere. It has sold about ten million copies worldwide, but it was his look, sound and style that was truly unique. People loved his crooner sound and his incredible vocal range. People compared him to some of the greatest singers in history, like Elvis Presley, Frank Sinatra and Roy Orbison. He had that deep, intense sound but then would hit you with a falsetto and people were hooked.

Chris would turn to acting, starring in various movies and television shows. You might not have known it, but Chris Isaak was quietly all over your media experience for about two decades. He even had his own The Chris Isaak Show for four years playing himself and featuring celebrity guests. The Biography Channel also gave him his own show where he’d perform one-hour interviews with musicians and offer live performances. And in reality, it was all because of one song, and one Atlanta music director’s love of a certain style of film. Truly incredible.

Amazingly, Chris has been nominated for a fairly equal amount of music and acting awards. While still considered active today, Chris doesn’t make too many appearances and hasn’t acted in much since 2016. At 64 years old, he seems content to give it a rest after four decades of being in the limelight. But if you need a fix, go back to Heart Shaped World today. You may not want to fall in love, but you probably will anyway.