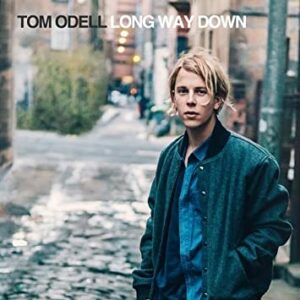 Perhaps it’s counterintuitive, but watching television shows about music can open your world to new artists and sounds. It’s the time of year where American Idol is back on Fox (Sunday and Monday nights at 7 p.m. CDT currently) and I typically don’t miss an episode. Lucky for me since it introduced me to today’s featured artist.

Thomas Peter Odell was born in England on November 24, 1990. His dad was a commercial airline pilot and his mom was an elementary school teacher. Because of his dad’s job, Thomas spent some time in New Zealand as a child. Like many modern musicians, he joined a band while in school. Because the group had such trouble holding onto a lead vocalist, he began singing the songs—and he also wrote most of them. Thomas found this a refreshing change since he sang the way he intended the songs to sound, rather than merely hoping someone else could bring his vision to life. At age 18, he attempted to go to an academic college, but abandoned those plans to head to a music-focused one. After that didn’t work out, he used his grandmother’s car to drive back and forth from his home to London to play solo gigs. Eventually he attended the British and Irish Modern Music Institute while playing in a band called “Tom and the Tides”.

Growing weary of relying on others, Tom moved to London and fully committed to a solo career. Around 2012 he was signed by In The Name Of Records, which was an offshoot of Columbia Records. The exec who discovered him noticed him at a live show where she remarked, “his energy onstage reminded me of David Bowie.” From there, the appearances began to follow suit. Tom was featured on several late-night talk shows in England and on some BBC music programs, eventually culminating in his debut album Long Way Down hitting shelves in June of 2013. Two singles were leaked before the full album dropped in hopes of gaining some traction. The tactic worked, and the album has certified platinum status in the U.K. and a few other countries. While he hasn’t quite caught on in the states yet, given shows like Idol are taking notice, it seems like that may not be too far away.

Stylistically, his influences are artists like Elton John, Jeff Buckley, David Bowie and Bob Dylan. He listens to current artists like Radiohead, James Blake and Ben Folds and you can hear a small bit of almost all of them in his music. The critical reviews are a bit mixed on his debut, but overall seem to be fairly positive (although one magazine gave him a 0/10—which prompted his father to complain to the site directly). For me, it’s a pretty solid folk-rock type record. It’s very much in that modern indie pop brand of music, where it blurs the lines of melodic blues as current artists seem to do so well. If you wanted to think of it as a solo Coldplay effort, updated for 2022 and potentially with a better vocal (sorry Chris Martin), you’d be in the right ballpark. This album tries to take you on an emotional journey, and I’d say it’s pretty successful.

Tom has released three more albums since Long Way Down and I’m excited to listen to them at some point in the near future. Until then, give this a whirl today. If you’re even remotely into indie or soft rock, I think you’ll really enjoy this—and if you enjoy folk, there is something here for you as well. Happy Tuesday!