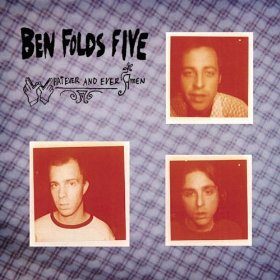 When you think of great trios in music history, today’s band wouldn’t even enter into the discussion. Why? Because of their name—you may be lead to believe they had five members creating their piano-heavy sound. Lest you continue to be misled by such naming shenanigans, I’ll give you all the info so you can be in the cool kids group.

It was 1993 in Chapel Hill, North Carolina. A young man named Ben Folds had grown up in the area and had been playing piano since age nine. After many other bands and a stint being a session musician in Nashville, he wanted to give being a rock star another shot. But this time he wanted a different gimmick, something unusual.

Given the popularity of alt rock and teenage angst at the time, Folds wanted to make “punk music for sissies.” He’d go on to find a bassist and drummer and name his new band Ben Folds Five. When asked why the name given a trio, he replied simply, “It sounds better than “Ben Folds Three.” Well played, Mr. Folds.

While their debut album in 1995 was a modest success, today we’re listening to their sophomore work, Whatever And Ever Amen which was released in March of 1997. The entire record was recorded in a two-bedroom house Folds had rented in Chapel Hill. Because of this unusual process, the original album had many recording flaws—you’ll even hear a telephone ring on one of the tracks. When heard in post-production, Folds thought it worked so they elected to keep it on the track.

The original pressings also featured a few hidden tracks, one being an actual studio argument between Folds and the other two band members. Upon hearing it over and over when playing their own record, the band decided it was ‘too real’ and brought up bad feelings from the day, and only those who own the early recording can hear it.

This album is good—it has sold nearly three million copies worldwide in almost twenty years. Not huge numbers, but my guess is only a small percentage of readers will have heard of the band before. It’s totally different music, “piano pop” or “piano rock” are common genre definitions, which who else was doing that in the mid-90s?

Folds is known for having a great sense of humor, and that shows in the style and lyrics. It’s an album that seems to not take itself too seriously, but can produce a ballad like “Brick” that was a staple in every sad emo soundtrack for a decade. The trio put on a great live show, very energetic and interactive so it was a bit of a sad day when they disbanded in 2000 with Folds pursuing a solo career. Although his music was just as good (if not better because it’s more polished) most fans will have a soft spot for this earlier work.

Something different can spice up your day, and I think this is it. You’re not going to hear a full album of piano and guitar anywhere else, so grab this for a fiver today. You’ll end up playing the air piano the rest of the day, I promise.

Seen On Pinterest: These Healthy Weeknight Meals Are Tried and True
The Ticketmaster Lawsuit You May Benefit From