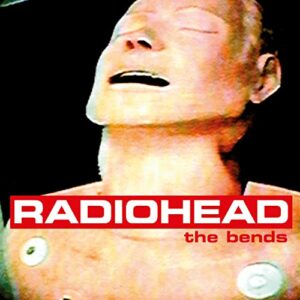 If you’re from a cold weather climate, nothing brings forth the excitement that comes with spring and warmer temperatures. It’s also my favorite time of the year to get in my car, toss on my favorite tunes, and just take a drive. Today’s featured album is on my personal top 20 list, maybe even top 10.

A group of guys were attending the Abingdon School, an independent school for boys in Oxfordshire, England back in 1985. Thom Yorke and Colin Greenwood were the same year, while Ed O’Brien and Philip Selway were one year older. They called themselves On A Friday, because that’s when they rehearsed in the school’s music room. They each picked their instruments based on what sounded good. You could argue they were more cohesive because of that decision and each guy could play multiple instruments. Their common bond was disliking the school and its strict atmosphere but enjoying classes with a music teacher who exposed the kids to jazz, avant-garde music, and 20th-century classical.

On A Friday began playing around town and were even offered a deal right away, but they turned it down in favor of heading to college. They continued to play and practice on weekends though, feeling they had something special. One night at the Jericho Tavern, a manager decided to check them out. Impressed, he offered the group his services and remains their manager to this day. The band signed a six-album deal with EMI shortly after and changed their name to Radiohead—a nod to a song with the same name by the Talking Heads.

Radiohead’s debut album came out in 1992, with about as poor an initial response as a band could get. The lead single “Creep” was called “too depressing” by critics and the group referred to as a “lily-livered excuse for a rock band”. They were dubbed Nirvana wannabes as they were lumped in with the alt-rock rage of the era.

About a year later, the song had made its way across the pond, where the video started to get heavy play on MTV. The group also began to work on their second album, The Bends which hit shelves in March of 1995. Because of some of the critique, Radiohead wanted to go an entirely different direction and put themselves in the experimental rock genre. Thom Yorke also began writing about his personal angst with more cryptic lyrics—something that is an absolute signature of the group to this day.

Six charting commercial singles later, The Bends has sold nearly 10 million copies worldwide, won various awards in multiple countries and is ranked No. 110 on Rolling Stone’s 500 greatest albums of all time. While some critics were totally unimpressed upon release, you’d be hard-pressed to find anything remotely negative about the record in modern reviews. Any depth reviewers felt the album lacked in the moment; it’s now hailed as one of the best ever.

I can’t say enough about Radiohead and their music. It’s been discussed on the blog before, but I merely scratched the surface of what this band is. The fact it’s been seven years between Radiohead posts is frankly appalling and I apologize. Every album they release is different—and I don’t mean rock to alt-rock—I’m talking rock all the way to electronic with elements of folk, soul, and R&B. Everything they do is all over the map.

The Bends is a very contemplative, slower paced album—probably the only one of its kind within the Radiohead discography. In the previous blog, I wrote about the follow-up record ‘OK Computer’, which is a random assortment of electronic and storytelling-style songs, with subject matter that’s beyond comprehension. If you made me pick which album I preferred, I simply couldn’t. They’re both so good, and so unique, it’s like asking me if I like The Beatles or Led Zeppelin more.

I could gush for days about Radiohead, instead I’ll just tell you to pick this one up today. Don’t leave me high, don’t leave me dry—let me know what you think of The Bends if it’s your first-time experiencing Radiohead. If you’re a fan like me, listen to this and then the rest of their catalog—I know I will. Happy Tuesday!