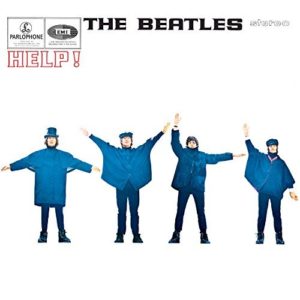 Countless times on this blog I’ve talked about legends and icons and any other hyperbolic word that is a synonym for greatness. Truly, there is largely one band that sets the standard in terms of being iconic. The band I’m listening to today just so happens to be the highest-selling band of all-time, with a mere 600 million albums sold to date.

In March of 1957, a sixteen-year-old John Lennon formed a skiffle band (basically a blues/folk band mostly consisting of homemade instruments) while in high school.  Fifteen-year-old Paul McCartney joined after the band gained some steam and he invited his pal George Harrison. The three men would dump all previous members and start playing shows on their own, often with the name Johnny and the Moondogs.

One of Lennon’s friends mentioned they should go by Beatals as a tribute to Buddy Holly and the Crickets. They used that for a bit until they became the Silver Beetles on a tour of Scotland and eventually shortening it to simply the Beatles. After a couple stays in Hamburg, Germany trying to gain a musical foothold, they started to see some popularity back home in Liverpool with a new music movement. Having released a record on Polydor to modest success, another manager was trying hard to poach them insisting they were capable of so much more. Signing with the new team, they were rejected by multiple labels before getting signed to EMI’s Parlophone label in late 1962.

Obviously we’re talking about the Beatles here, so you probably know how quickly and suddenly the band blew up. Their first album released in February of 1963 and Beatlemania was alive and well. Today however, I’m listening to Help!, their fifth studio album which debuted in August of 1965.

A film was released simultaneously to the album with the record serving as the soundtrack. At the time some were confused since the bulk of the tracks didn’t show up in the film, but the reviews were positive nonetheless. One single from the record was “Yesterday” which to date is the most-covered song ever written. The album was fresh for Beatles standards, showing a more folk or blues style instead of the standard upbeat Brit pop. You could hear the influence of guys like Bob Dylan or McCartney’s dalliance with country flavors. In the moment, some critics heavily panned the album, calling the film/soundtrack combo an abomination. Because of that, the album was overlooked for decades. In hindsight, most give the album five star reviews and refer to it as one of the hidden gems in the Beatles catalog.

The Beatles are the most household name in music history, no doubt about it. I would be hard pressed to find anyone who has never heard any of their songs, but in this case, this is an album you don’t frequently hear played start to finish. Is it my favorite? Probably not, but some of the hits on Help! are simply tremendous—and the lesser known tracks paved the way for some of the future experimentation the band would end up doing.

If you can recall back in 2010, Apple was sending notices that “big things were coming” and saying nothing more. For multiple weeks that was all their messaging showed online or in ads. All that occurred was the Beatles catalog becoming available on iTunes. That’s the type of respect and awareness this band creates, even to this day. In spite of a breakup in 1970, they remain one of the highest-selling bands year in and year out to this day.

This 600 plus word post will have done nothing to describe the career of these titans of music, but they have another dozen albums for me to review and continue to expand. Frankly, I’m shocked this album is only five bucks today; someone is going to have to help me understand why great music can be so cheap. Until I figure that out, give this a go today. You won’t have to hide your love away for this one; you can scream it from the tree tops!

Pacific Rim, Acrimony, Paul, Apostle of Christ coming to TDS TV on Demand
Can you spot the phish?