By Austin Krueger on November 4, 2014 in Online Life
Great music doesn’t always come from Casey Kasem’s Top 40 Countdown. Over the years of being a music nut, I’ve stumbled upon bands that have a totally unique sound that sort of sucks you in. In today’s case, this is a band I fell in love with when I was 12 years old. Here we are nearly two decades later, and they’re still one of, if not my favorite band of all time.
Read full story 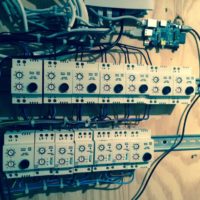 By Jason Compton on October 29, 2014 in Online Life
You hear "the Internet of things" talked about all over in the Internet and even on TV. But what is it? Jason Compton demystifies this not-as-new-as-you-might-think idea.
Read full story

By Austin Krueger on October 21, 2014 in Online Life
Normally when you think of bands, the image of a huge stage and a 4 to 10-member group comes to mind. It’s a rare occurrence to check out a band and come to find out it’s only a duo. Today’s Cheap Tunes Tuesday installment isn’t only just two people making amazing music, but perhaps the best music duo of all time.
Read full story

By Missy Kellor on October 10, 2014 in Online Life
This week: Tesla unveils an amazing new car with auto-pilot features, HP splits in two, and Snapchat has been hacked (big time). In other news, Apple Pay is coming soon -- really soon, but you should also check out a cool all-in-one credit card coming next year (it appears to be way better than Coin). And believe it or not, there's a big change coming to yard tool technology and, if you need a chuckle, be sure to check out some age prediction software that has produced some hilarious results.
Read full story

Falling back into your school routine?

By Guest Blogger on October 8, 2014 in Online Life, Products
The days of pens and crayons have been replaced by laptops, tablets, and smart phones. But what happens when they stop working correctly? It’s easy to be shaken when your devices suddenly start misbehaving—especially if you’re scared about losing important files. There are three things you can do to help keep your electronics running smoothly…and avoid that sinking feeling you’ve lost hours of work.
Read full story

By Austin Krueger on October 7, 2014 in Online Life
OK Computer came out in May of 1997, and if you were a fan of Radiohead before this record, you probably picked it up on that spring day, put it in the CD player…and wondered what in the heck you just heard. The album was a strong departure from their previous efforts but the result is one of the best collections of songs in history—and it's today's feature on Cheap Tunes Tuesday.
Read full story

Seen on Pinterest: Creative (and mostly DIY) Costumes for Any Age

By McLean Robbins on October 6, 2014 in News, Online Life
Don't get caught up in long lines at the party supply store this Halloween. Instead, take a DIY turn this season and try some of these creative costumes for any age. This week's Seen on Pinterest lets you explore everything from the must-have looks from Frozen to creative couples costumes that won't break the bank.
Read full story

By Missy Kellor on September 26, 2014 in News, Online Life
This week: the internet is "Shellshocked" by a new bug worse than Heartbleed, MIT is developing a new shrink-wrap space suit, and check out a GIANT poster with just about every spaceship ever imagined on it. Also, get a load of a mini robo octopus, a new kind of fire hydrant for the 21st century, and the smartest lightbulb you'll ever meet. If that wasn't enough, I've rounded up reviews on the new BlackBerry Passport and have to admit being rather charmed by the idea of Polaroid's newest introduction.
Read full story

By Austin Krueger on September 22, 2014 in Online Life
When you think of Las Vegas, images of casinos, money and bright lights come to mind. Sure, maybe a few musical acts too, but they tend to be the show tunes—you know, Wayne Newton type of music—not necessarily the stuff you hear on current radio. You don’t often hear of up-and-coming bands playing the side stages of Vegas hoping to get noticed by a major label…but that’s exactly what happened for today’s $5 album and featured band, The Killers.
Read full story
← Previous 1 … 79 80 81 … 90 Next →