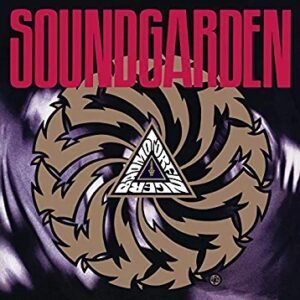 Do you have a band that you grew up with and loved, but found a greater appreciation for them as you got older? That is today’s band for me. I grew up when they were new and fresh—and child me loved them. Listening to them as an adult, however, makes me realize I didn’t begin to understand the impact they had on me and the music industry. Let’s check ‘em out.

Soundgarden isn’t new to Steaming Tunes Tuesday, but you have to dig into the archives all the way back to 2015 to find the previous post. Naturally, I talked about the formation of the group and their monstrous Superunknown album. That album arguably defined the ‘90s. It was full of angst and heavy guitar, had the intense video for “Black Hole Sun” that was on loop at MTV, and everyone knew about the album and probably owned it. While that was certainly a logical place to start with the band, it shouldn’t ultimately define them—some consider their earlier work better than the hits.

Soundgarden had three studio albums prior to their breakout. The first two were commercial flops, but they had reason for optimism. While the albums didn’t have the sales, Soundgarden were getting singles on the Billboard 200 and generating a real, legit following. Both the band and the label felt they were on the brink of something massive—and sometimes all you need is a little controversy to help get you there.

A&M Records decided to leak the single “Jesus Christ Pose” from the band’s unreleased third studio album. MTV banned it, radio stations around the U.S. refused to play it, saying it was “anti-Christian.” Lead singer Chris Cornell would go on to explain the symbolism behind the words, and how the song wasn’t attacking any particular religion, just those who hide behind it and act as martyrs. The lack of air play essentially ruined the initial release of Badmotorfinger, which hit shelves in October of 1991—but then the unthinkable happened. Nirvana took the world by storm and grunge music from Seattle suddenly became mainstream.

Where was Soundgarden out of? Seattle. What kind of music did they play? Grunge. Were they full of rage and counterculture? Yep. Enter the popularity fest.

In more modern reviews, critics felt this could have been Soundgarden’s best work. It was incredibly contemporary for the times but sounded totally different than anything else. The band was nominated for Grammy awards, the album sits at No. 45 of Guitar World’s 100 greatest guitar albums of all time and No. 2 on Rolling Stone’s 50 greatest grunge albums list. If you care about sales, it sits around ten million sold worldwide to date, so it checks that box as well.

If you’re unfamiliar with the early 1990s, this album came out a month after Pearl Jam’s Ten and merely weeks after Nirvana’s Nevermind and Red Hot Chili Peppers’ Blood Sugar Sex Magik. Those three albums are a ‘who’s who’ of ‘90s music icons. It’s easy to sit back and think that Badmotorfinger has no business being mentioned with the likes of those records, but you’d be mistaken. The guitar work on this album might be the absolute best of the four—and Cornell’s vocals stack up with anyone from the era (maybe in all of music history.) Badmotorfinger blurs the line so hard between alt rock/grunge and metal, and it does so flawlessly. It’s part of the reason why Soundgarden is so great and attracted fans from all walks of life. Rock music with a broad appeal is sort of rare, but their sound, street cred, and look all had a home with fans of almost any genre.

Soundgarden broke up in 1998 after Chris Cornell decided to do his own thing. They reunited in 2010 for only a short time and, sadly, Cornell passed away in May of 2017 from suicide. I would highly recommend you give this one a try today, because it’s from a time that should be on the Mt. Rushmore of music eras—and the band (and this album), are synonymous with the time. Happy Tuesday!