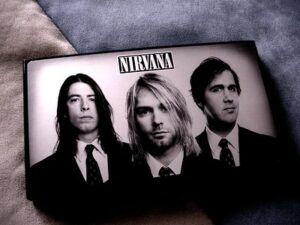 Recently we’ve talked about inspiration behind what artists get featured in this blog—sometimes it’s awards, sometimes it’s hearing a song, but there’s also the music that elicits an emotional reaction. Anyone who truly enjoys music likely has a timeframe or a genre that they truly identify with. That music, no matter the setting or context you hear it, makes you respond by singing along, dancing, or whatever it may be. Today’s group is in that wheelhouse for me and, the older I get, the stronger the bond becomes.

On Sunday, I was at one of my favorite places—American Family Field watching the Brewers take down the Cardinals. Around the sixth inning, a riff played from one of the most iconic songs of all time and instantly, subconsciously, I began singing along and feeling nostalgic. It made me feel instantly better and more engaged, which is the profound impact music can have. That riff? ‘Smells Like Teen Spirit’ by Nirvana. And sure, I’ve talked about them before—and even before that, but they’re unquestionably one of the most influential grunge acts of the ‘90s, which spurred on a true music revolution. People like me would probably not be as invested in music today had it not been for these pioneers. Since it’s been six years between Nirvana posts, I felt like it was time to revisit them here.

In my Nirvana posts I’ve bounced around a bit in time. I started with their third studio release, and then an acoustic album released posthumously after Kurt Cobain’s death in 1994. Today’s featured release isn’t their debut, but their second studio record that put them on the map and solidified their place on music’s Mt. Rushmore.

We’ve all heard the album and singles off of it, but Nevermind hit shelves in September of 1991. They recorded a demo of the album in California with a shoestring budget of only $65,000. They didn’t have enough money to get from the studio in Van Nuys to Los Angeles, so they played a small show where they debuted the smash single “Smells Like Teen Spirit”. They recorded the show and sent the session and their demo, to Butch Vig (of Garbage fame), who ended up producing their sophomore album. Vig got them up to Madison, Wisconsin’s Smart Studios and the record started coming to life. The artist that Cobain was, Vig indicated he was difficult to work with. “He’d be great for an hour, then sit in a corner and say nothing for an hour.” Vig and Nirvana were not happy with the original mixes, so they sat back and started listening to heavier metal bands from the ‘80s. They put on groups like Slayer or the Ramones and suddenly Nirvana’s album was going to become full of harder guitar and angst. Seems silly to think that would have such an amazing impact, but it set the tone for all grunge going forward.

Only four tracks are technically listed as commercially released singles, but they were all iconic and still in heavy rotation today across all music platforms (and if you’re hearing a song that’s thirty plus years old at a ballpark, odds are you’re hearing it on radio as well). All twelve tracks were solid, and if you listen to them today, feel like they could have been recorded yesterday. It still feels so fresh—which also makes their acoustic album that much more impressive since it was such a departure from the arrangements on Nevermind.

Critically, you’re not going to find a negative review of this album. For all the reasons I’ve discussed, at this point in history, it’s an iconic album. It has sold over fifty million copies worldwide, and that number grows each year. Several countries list it as multi-platinum, including remote countries you wouldn’t think would be so into Nirvana.

Plain and simple, this album is awesome. If you haven’t heard it, listen to it. If you’ve heard it a million times, make it a million and one. When ‘Teen Spirit’ hits, get pumped like I did. Take yourself back to 1991. Here we are now, entertain us! Happy Tuesday!

How do you spot a scam? The FTC says to listen to how someone tells you to pay
TDS offering free SHOWTIME preview + special discount