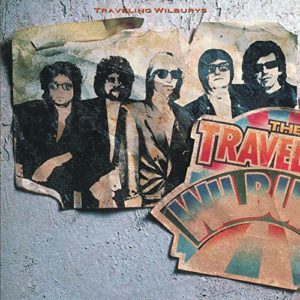 Occasionally you hear a tune on the radio that sounds so familiar, but you can’t quite place the artist. In the case of today’s featured band, you almost certainly can place multiple voices—but you may have had no idea it was part of a short-lived supergroup. Let’s dive in!

George Harrison had just put out a successful solo album but still had an idea for more. In January of 1997, the former Beatle shared his dream with his buddy Jeff Lynne from the Electric Light Orchestra. When the two discussed who else to add, Harrison chose Bob Dylan and Lynne opted for Roy Orbison. While Harrison was working on his previous album, they had some shoddy recording equipment and he consistently joked, “we’ll bury ‘em in the mix.” So, the term “wilbury” was coined, giving the new band a name. They started out as the Trembling Wilburys, but Lynne amended it to the Traveling Wilburys.

Seemingly all set to begin the new venture, Harrison and Lynne became friends with Tom Petty in October of ’87. Petty and the Heartbreakers were Dylan’s backup band on his Europe tour and so Petty began hanging out more with them as well as the other members of the Wilburys. It became clear he’d be a great fit, both musically and more importantly, he really connected with the guys. In April of 1988 the band officially came together and started searching for a label.

Harrison had an existing deal with Warner Bros Records, and they were looking for a B-side for his European release. The guys decided to head into Dylan’s garage since no studios were available on such short notice, and they jammed out a tune. A box in the garage had a label reading “Handle with Care” and Harrison morphed that phrase into a song he’d already began to write. They handed that single to the Warner Bros execs who were completely blown away. The execs knew the track was too good to be a B-side, and felt a whole record by these iconic musicians could be gold.

Traveling Wilburys Vol. 1 would go on to be released in October of 1988. They ended up masquerading as a group of brothers, trying (humorously) to disguise themselves from being recognized as a supergroup. Expectations were fairly tempered, but the album was an immediate success. It shot up to no. 3 in the U.S. and sold over two million copies within six months. When the aforementioned single hit the charts, it took off and total sales to date are somewhere in the 12 million range. The recognition even hit the Grammy Awards, with the group taking home Best Rock Performance by a Duo or Group with Vocal.

What makes this album so incredibly unique is that every member of the band had the ability to perform lead vocal. So, track to track, you get a different feel. It’s also like they were able to take each individual musical style and toss it in the blender. The pureed result was the fascinating combination of what you’d get listening to each man’s solo efforts. It wasn’t hard or soft, it wasn’t fast or slow—it was just the right mixture of everything. The record comes across as one where the guys would all show up a noon, sip a cup of coffee, tell a few jokes, and then start riffing and making some music. And, that’s exactly what happened, by all accounts. It was just a fun time jamming with a group of friends that just so happened to produce an album that sold millions of copies.

Unfortunately, Orbison passed away in December of 1988 so some of the fun and success felt short lived. But at a time when his, Dylan’s and Petty’s time in the sun seemed to be fading, the Wilburys were a great revitalization. The band recorded one more album in 1990 without Orbison, not quite achieving the same success. For me, this record sets the bar for all supergroup albums, and I think you’ll enjoy it too. And even if you don’t, well it’s all right, if you live the life you please. Happy Tuesday!