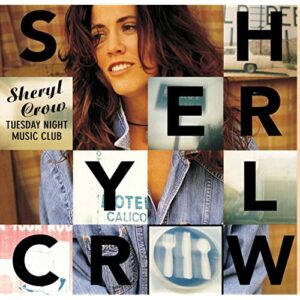 Today’s featured act is yet another instance of an incredibly popular act, and unquestionably a household name when it comes to music and maybe even acting—but her SIXTY million albums sold? That was an absolute shocker to me. Let’s check out the mystery act.

Sheryl Suzanne Crow was born in Kennett, Missouri February of 1962. Mom was a piano teacher and dad was a lawyer who dabbled in trumpet playing on the side. When Sheryl was in high school, she was a very good athlete, making all-state in track, specializing in the 75-meter low hurdles. Alongside that, she was part of the pep club, FFA, and National Honor Society.

Somewhat turning her focus to music, she enrolled in University of Missouri in Columbia earning her degree in music composition, performance and education. While in college, she was part of a band called Cashmere and a member of the International Music Fraternity for Women. She felt her natural transition after school was to become a music teacher, which she did in Fenton, Missouri. This also allowed her to sing in band on the weekends. She got her introduction to the masses by singing in commercials, making $40k on a McDonald’s ad alone.

Sheryl would go on to tour with Michael Jackson as a backup vocalist during his Bad tour. Her debut album was set to release in 1992 but was scrapped—a mutual decision by her and the label. What seemed like a devastating thing, turned into a positive. She signed with A&M Records and her debut Tuesday Night Music Club came out in August of 1993. The excitement was quickly dashed, however, because the first two singles simply didn’t catch on. With the label set to move on, they tried one last time—this time releasing “All I Wanna Do” in April of the next year. The single itself would catapult to no. 2 on the Billboard 200 and propel the album all the way up to no. 3 in the U.S. Over the subsequent 27 years, it has sold nearly 15 million copies worldwide.

The album name came from an ad hoc group of musicians, including Crow, who got together on Tuesday nights to work on this album and other projects. Many of the artists in that group share songwriting credits with Sheryl on this album. In addition to all the sales success, she would win three Grammy Awards in 1995, giving her critical credit along with all the sales.

One of the most interesting things about Sheryl’s music is the total change in styles she’s shown over the years. You can even hear it on this album alone. Undoubtedly classified as pop, you hear the influences of rock, folk and country too. Maybe most importantly though, it feels like classic Americana. Almost like a female John Mellencamp or Bob Seger. Something that you sit back to on a Saturday night while sipping your favorite beverage on the front porch.

In these early years, she exclusively played a 1962 Gibson County Western guitar, increasing her desirability with that particular genre. When the guitar finally bit the dust, Gibson built her a replica in 1999 and called it the “Sheryl Crow” model, releasing it commercially as well. She has such a great reputation in the industry, which is only made surprising by her many off-stage relationships with men like Eric Clapton, Owen Wilson and Lance Armstrong.

Unbeknownst to me, but Crow has acted in several television programs over the years. Making appearances in hit shows like 30 Rock and NCIS. She’s won six more Grammys from the original album along with the crazy total sales noted above. Her career isn’t over, but if she decided to hang it up, she’d easily be one of the most decorated vocalists in history. And always remember, if it makes you happy—it can’t be that bad. Happy Tuesday!