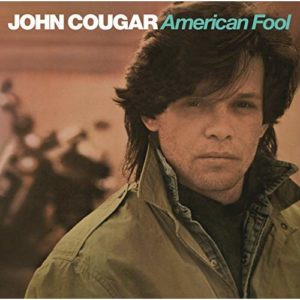 No matter how much music you listen to on a weekly basis, sometimes even the most avid music lovers forget about an artist from time to time. Today’s featured act is one that has stuck around for roughly four decades and everyone knows but just may not be in the heavy rotation. This act is certainly not in mine, but I have to give respect to anyone Johnny Cash says is, “one of the 10 best songwriters” in music.

John Mellencamp was born in Seymour, Indiana 1951. Suffering from a birth defect called spina bifida (where there is an incomplete closing of the backbone to the spinal cord); he needed corrective surgery for the life-threatening condition as an infant. A fact his parents didn’t inform him of until age 12, when a friend asked about the large scaring on his neck.

Growing up in a small home intended for WWII veterans, John and his brothers lived in the basement in a triple bunk bed. Around middle school John began picking up instruments at school and playing around. That loose interest turned into starting a full-on band at age 14. Intending to make it big as an adult, those plans hit a snag when he eloped with his girlfriend at 18 and became a father six months after graduating high school. While going to a two-year college in Indiana, John got mixed up pretty heavily in drugs and alcohol. He managed to finish school and play in side bands all throughout, but never hitting it big.

In the mid-70s, John got sober and moved to NYC to pursue music full time. The Mellencamp changed to ‘Cougar’ and he began performing. He was signed almost immediately to a label and put out his first album right away in 1976. While floundering a bit, it all came together with the release of American Fool in April of 1982. It was his fifth studio release, but the four prior had failed to make any real splash. A couple Top 40 hits, but nothing crazy.

Backed by two major singles, execs felt American Fool had the most potential and everyone developed high expectations. Turns out they were right, and the album shot up to #1 on the Billboard charts and stayed there for nine weeks. Truth be told, recording it was a struggle. The album had over 20 tracks and the label felt 18 of weren’t record worthy. John almost got released from the contract, but thankfully they let him redo most songs with a new producer. To date, the album has sold over 10 million copies worldwide.

Since American Fool was such a success, John had the clout to change his name back to using his real surname. Over the course of about 10 years, he went from Johnny Cougar, to John Cougar to John Cougar Mellencamp (eventually going all the way back to just John Mellencamp). His music is signature Americana—like Bob Seger or Bruce Springsteen. It’s the type of music you play sitting in the back of a pickup watching fireworks or maybe on the beach on a hot summer day. With a label like that you might think his songs have no substance, but that’s not true. He really is a great songwriter and can paint a picture through his music. This album brought his sole Grammy Award in 1983 and was a major influence on his induction to the Rock and Roll Hall of Fame in 2008.

If you’re not familiar, give Johnny Cougar a shot today. It’ll remind you of ‘80s rock, except with fiddles, accordions and autoharps. It’s got that nice laid-back style you’ll want to kick the feet up and sip lemonade to. You’d have to be a real American fool to not pick this up for $5 bucks today, it’s sure to make you rock your Tuesday away.

A Quiet Place, Rampage, and Isle of Dogs coming to TDS TV on Demand
Virtual Private Network (VPN): What is it? How can it help me?