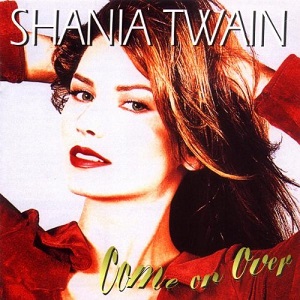 While I’ve never proclaimed to be the world’s biggest country music fan, I’m making an effort to listen to different artists. Sometimes I’m shocked to learn how immensely popular the genre is overall. Today’s featured act has sold over 100 million records, making her the best-selling female country artist of all time—and close to the top of best-selling artists regardless of genre.

Eilleen Edwards was born in Windsor, Ontario in August of 1965. Mom and dad divorced when Eilleen was just two. She and her two sisters moved with mom to Timmins, Ontario. There, her mom remarried an Ojibwa native from the nearby Mattagami Nation named Jerry Twain and together they had a son. He’d adopt the girls, and the couple also adopted an orphaned nephew. Eilleen always recognized Jerry as her father—not her biological dad. In spite of the togetherness, family life was tumultuous at best. In 1981 her mom drove herself and the kids over 400 miles to a homeless shelter for assistance because the couple was often fighting, sometimes violently.

Eilleen began singing in local bars at age eight just to earn a little money and help the family pay the bills. She’d typically get paid $20 singing between midnight and 1 a.m., performing for leftover patrons after the bars stopped serving alcohol. Eilleen stated she hated playing to drunks, but she loved the music so that kept her going. At 13, she performed on CBC’s Tommy Hunter show and was in a local band called Longshot, which covered Top 40 music. Upon graduating high school, she joined a cover band called Flirt that toured all over Ontario. She started taking vocal lessons as well, hoping to hit it big.

All of her hard work paid off and Eilleen was noticed by a Toronto DJ named Stan Campbell who wrote about her powerful voice and impressive range. Fast forward a bit, and she moved to Nashville and got signed to the Mercury Nashville label. At that time, she would change her name to Shania, which is said to be an Ojibwa word for, “she’s on the way”. Her debut album would drop in 1993, but today I’m listening to her third studio album Come On Over released in November of 1997.

If you’re asking yourself, why talk about that particular album? It’s simple really; it’s the best-selling country album of all time, the best-selling studio album by a female artist, and the best-selling album by a Canadian. It’s the eighth best-selling album of all time in the U.S. and the sixteenth best in the U.K. Well over fifty million sold worldwide at this point, and it sat at number one on the Billboard charts for over FIFTY non-consecutive weeks. In terms of artist and genre defining records, this is it. Twelve of the sixteen tracks were commercially released as singles, something I’m not sure I’ve ever seen before out of one album.

Again, I’m not the foremost expert on country tunes, but it sure feels like this album was a breakthrough. I can’t immediately think of another artist to truly crossover country and pop music with any sort of success before Shania. The sales would certainly seem to indicate that as well, it was purely something so unique and refreshing, people went gaga over it. Undeniably the album still feels country, but the pop and rock elements certainly aren’t hidden. Reading into more detail, the producer was best known for his work with bands like Def Leppard, The Cars and AC/DC— so clearly he steered Shania toward some of the bigger choruses and instrumentation that frankly wasn’t in the country repertoire at that time. When you add all of that back end perfection on top of Shania’s undoubted vocal talent, you’ve got a winner.

Shania has taken on a permanent residence in Las Vegas, with her first show opening next month and expecting to run at least two years. She put out an album as recently as 2017, potentially with more on the way. Come on over and treat yourself to a country icon today, you’re still the one that can go back and listen to some classics—and hey, she might even impress you much. Happy Tuesday!