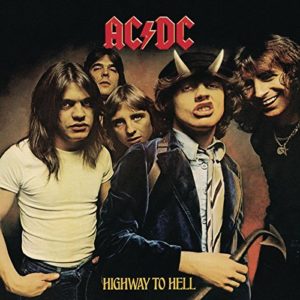 If I threw a number out, say—200 million, would that catch your eye? Let’s say in context, that’s the number of albums a band has sold over five decades—would that peak your interest? Thanks to a loyal reader, today’s incredibly well-known band was requested and I get to listen to a classic.

Malcolm and Angus Young were born in Glasgow, Scotland to a large family. After going through The Big Freeze of 1963 with snow eight feet deep, a TV ad offered families a different life in Australia. All 15 members of the Young family left, seeking a better (or warmer) life. An older brother began playing guitar, so Malcolm and Angus also took interest. After dabbling in music themselves, they decided to form a band. Thinking of naming it after their little sister, they saw the initials “AC/DC” on her sewing machine. They felt the name summarized their raw energy and it stuck.

In 1973 they found a bassist, drummer and a vocalist. While at first adopting a glam rock image, that didn’t last too long. Bon Scott was referred to the band by a mutual friend, and he brought a whole new look to the group. Scott was such an experienced vocalist and brought a bit of an edge, the band put together a record in 10 days and released it in Australia. The first two albums were such hits down under, America and London would soon take notice, and AC/DC began getting major airplay worldwide.

When they entered the scene internationally in 1976, they began touring with huge acts like Black Sabbath. While they were experiencing success, they hadn’t seen the monster sales a band of their caliber would expect. By 1978 the label was looking to get some charting power out of AC/DC. They tossed a young producer their way, and told them all to figure it out. Highway To Hell would go on to be released in July of 1979.

Given it was the band’s fifth studio album, expectations were high—and it met them. It would become the first album to break the U.S. Top 100, going all the way up to #17. The lead single matched the album title, and was the rock anthem the band needed to cement a place on major radio for decades to come. When asked how the track came about, the band discussed life on the road, touring with no money and the many sleepless nights. A reporter once asked, “What would you call an AC/DC tour?” and the response was, “Well, it was a highway to hell. It really was.”

Odds are you know and are familiar with AC/DC’s hits. It’s tough to not hear them on some form of radio, even today. Their music tended to not be commercially available in the modern sense, because the band didn’t want people buying or listening to singles on streaming services. Eventually they relented, and now their entire catalog is available on iTunes and Spotify

AC/DC is iconic—what else needs to be said? This album alone has sold nearly 20 million copies worldwide and their follow up record sits at almost FIFTY! Given lead singer Bon Scott passed away just months after this album was released, it’s no small feat the band stuck together and kept making music—let alone continued to have success after success.

While the band is still active today, Angus Young is the only member still around from the original days. His brother Malcolm passed away just last year and singer Brian Johnson (who took over for Scott) retired in 2016 due to failing health. Guns N Roses frontman Axl Rose has taken the reigns for a few live performances, and rumor has it they may be getting back in the studio, but stay tuned. Until then, pick up Highway to Hell today for $7.99. At that price, no need to beat around the bush—get it while it’s hot!