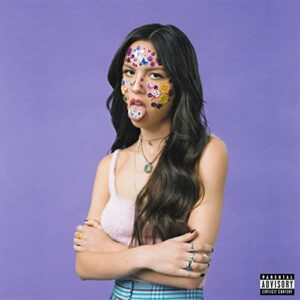 It’s certainly not uncommon for a pop music star to get their start in another medium and today’s featured act falls into that category. She did a little acting as a kid and now finds herself blowing up the pop music scene in a way few have seen before.

Olivia Isabel Rodrigo was born in February of 2003 in Murrieta, California. Growing up in Temecula, she has German and Irish ancestry through her mom, and her dad is of Filipino decent—the latter of which proved to be a major influence growing up. Her great grandpa moved to the U.S. from the Philippines when she was a teenager and her family followed Filipino traditions and cuisine at home.

Olivia began taking acting/singing lessons at age six and began starring in productions at her elementary school. That continued in middle school, when mom and dad decided to move the family to Los Angeles since Olivia landed a role in the television program Bizaardvark on the Disney channel. Technically, her first onscreen appearance was in an Old Navy commercial, but from there, her acting career seemed to be heading toward the moon. She landed small parts in television shows, films and other ads, until her role in the Disney+ series High School Musical: The Musical: The Series in 2019. Olivia was praised highly for her work on the show—and for her vocals, as well.

Her performances were so good, Interscope Records and Geffen reached out to Rodrigo in 2020. In January of 2021 her debut single “Drivers License” was released and instantly became critically acclaimed. It broke Spotify’s record twice for most daily streams ever for a non-holiday song with 15.7 million and then 17 million global streams in consecutive days. The single then went to stream 80 million times on Spotify alone in seven days—another record. Oh, and by the way, it debuted at No.1 on the Billboard Hot 100. Need more? It debuted No. 1 in Australia, Ireland, New Zealand, Netherlands, Norway, and the United Kingdom as well. Not only was her trend huge, but it was also global. Rodrigo stated, “my entire life just, like, shifted in an instant.”

Rodrigo’s full album finally hit shelves in May of this year titled Sour. Originally it was slated to simply be a four track EP, but the popularity of the single was so huge, the labels wanted a full-length feature. Not surprisingly, the album was a smash critically and commercially just like the single. It’s hailed as an anthem for “Gen Z pop” and Clash magazine noted it’s “marked by excellence from front to back.” I’ve listened (and reviewed) a lot of albums in my day, and I’m taken aback. I’ve never seen a pop album with this sort of unanimous acclaim—let alone a debut, especially a debut of someone who barely turned 18 during recording it.

Reading this acclaim, I found myself skeptical. After all, I’m a crotchety old man who doesn’t listen to a ton of pop music. Hand up, I was wrong. Five tracks in I knew this was something better than your run-of-the-mill bubblegum record. Sure, she talks of adolescence and the challenges that come with it, but also failed romance and heartache – universal themes of any good folk, country, or soul album. It seems like it’s only been out for a few minutes, and it’s already certified platinum in four countries, including the U.S. Checking the liner notes, I’m a bit surprised that Taylor Swift has writing credits on two tracks, expanding her role in the modern music business. From a comparison perspective, the extremely obvious one is Billie Eilish—which loyal readers may recall I was very high on as well. Overall, it’s got a more upbeat feel in spots than Billie though, and you can hear the Swift and Lorde type influences she cites.

Amazingly, I could blather on about this album with another 600 words, but I’ll just summarize by saying, put this one on today. I think you simply be a fan of music and enjoy this. It blends enough genres I feel there is a little slice of pie for anyone, and that’s why she’s arguably the biggest star on the scene today. Happy Tuesday!