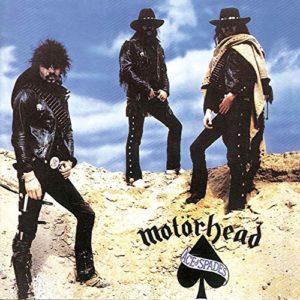 If last week’s band was the height of melodic contemporary music, today’s group might be the polar opposite. A loyal reader recently asked to sprinkle in a little bit more of the harder rock music—and I’m a man of the people! The featured group today may have set the bar for any hard rock act in the modern era.

All the way back in May of 1975, Ian “Lemmy” Kilmister was dismissed from his band after being arrested in Canada for drug possession. As it’s uncommon to be kicked out of a rock band for such a thing, a disgruntled Lemmy moved to form his own group. He wanted to call it Motorhead—inspired by the final song he wrote for the previous band. This group was going to be different though saying he wanted it to be, “loud, fast, arrogant, speed-freak rock ‘n roll—will be so loud if we move in next door, your lawn will die.” That’s what he was aiming for.

Being from London, the band got their start in the basement of a furniture store. After playing only 10 local gigs, they got the call to open for the popular Blue Oyster Cult. After some lineup changes, in April of ’77 it appeared the band would be done, with half the members resigning. Lemmy got them to agree to do one last show and convinced a friend to bring a mobile studio to record it. The buddy didn’t come through, but fortunately knew some folks that could get Motorhead some studio time. The trick worked, a record was recorded, and the band stayed together.

They’d put out two more albums in 1978 and ’79, bringing Motorhead a fair amount of success and popularity in the U.K. They got their contract extended with the label and were a staple on the charts. Today’s I’m listening to their Ace Of Spades album released in November of 1980. It shot up to number four on the U.K. Albums Chart very quickly, and reached Gold sales status by March of ’81. The title track was considered such a hit, the studio decided to give Motorhead a shot and released this album in the U.S., their debut release across the pond.

The band gained such a loyal following that Sounds magazine coined the phrase “New Wave of British Heavy Metal” which was invented solely to describe Motorhead. Other bands would join that description, but Motorhead was the pioneer. Once they were categorized with other heavy hitters, Motorhead found all kinds of new fans. This began the most successful period in Motorhead’s history.

It’s rare to listen to a band that was doing something so different than anyone else at the time—so much so that even critics struggled to classify their sound. Metal certainly wasn’t new, but it wasn’t in fashion during the period. Motorhead changed all of that. Suddenly it was cool to listen to hard, in-your-face rock again, and Lemmy was behind all of it. His vocal is iconic, you know that voice the second you hear it. I’ve read multiple reviews of the record, and perhaps the most apt says Motorhead is “one of the best metal albums by any band, ever.”

There’s no debating the absolute classic nature of it start to finish, and clearly the title track became their anthem—one that is still frequently heard on rock stations all over the world to this day. The release was such a smashing success, the label started to put out all their studio session work and previously unreleased material. They caught lightning in a bottle and wanted to capitalize on it.

Motorhead rocked hard for forty years, before it came to an end with Lemmy’s passing in 2015 from cancer and heart failure. If you’re looking for some legit metal today, go back and give Ace of Spades a shot—you may just enjoy it! Happy Tuesday!