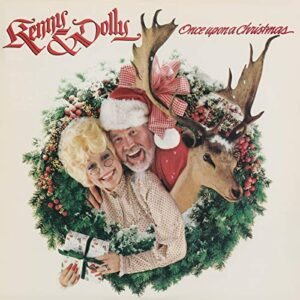 If last week’s quirky holiday album didn’t get your holiday spirit meter up to a 10, perhaps our entry this week will. It comes from a simpler time and features two of the most iconic acts certainly in country music history—but maybe also in all of music history.

Kenny Rogers and Dolly Parton first worked together in 1976 when Rogers was a guest on Parton’s syndicated series simply titled Dolly. They would collaborate again on their hit 1983 single “Island In The Stream”, which was a No. 1 hit. In a time when there was no streaming (no pun intended), the single sold an astonishing five million copies. It was clear the two had some sort of chemistry that was unparalleled at this point in the music world.

Naturally after that success, it seemed to make sense to pursue more opportunities for the duo to work together again. So, Rogers proposed an idea to Dolly—to do a full-length collaboration of Christmas songs, culminating in a commercially released album. Dolly loved the proposal, but because of busy schedules, the recording wasn’t able to take place until the following summer. The album, titled Once Upon A Christmas, was complete in September of 1984 and was officially released on November of that year.

The debut was paired with a television special promotion titled Kenny & Dolly: A Christmas to Remember, which aired December 2 on CBS. The special featured all ten tracks off the album with a variety of set-ups. Rogers and Parton dressed as Santa Claus and Mrs. Claus for one skit and another made it look like they were attending a USO party in WW2 London—there was even a rousing finale in a down-home country church. The special was viewed by an astonishing thirty million people. Wrapping all that into a nice gift, three singles were released to commercial radio with one peaking at number 40 on the Billboard charts.

The album has had amazing staying power and broad appeal. In Europe, one song from Once Upon a Christmas charted the same month of the release. Another single hit the Hot Country Songs chart over a decade later in January of 1999. These are significant feats simply unheard of when it comes to holiday records since, normally, they’re viewed as novelties you dust off once a year. Kenny and Dolly really bucked that stereotype.

Part of the reason why this album was so successful was Rogers himself. Dolly noted his “Santa Claus spirit” and how much fun he made it to work not only for her, but everyone else associated with the record. Rogers said it was because he was raised in a Baptist household, which always thought of Christmas as a special time—one when families who lived apart for 364 days a year would get together and become close again.

It’s undeniable that the duo has some sort of chemistry that’s just hard to explain. Their voices blend as though they grew up singing with one another and understood all the subtle nuance behind harmonizing so perfectly. With all that said, it’s easy to understand why this has sold over five million copies worldwide.

Rogers unfortunately passed away earlier this year, but Dolly is still going strong at 74 years old. Not only is she belting out country classics, but she started a well-respected kids book program, and she’s also assisting in the current pandemic by offering financial assistance toward vaccinations. In honor of two legends, pick this one up today and give yourself that holiday spirit boost. After all, the best way to spread Christmas cheer is singing loud enough for all to hear. Happy Tuesday!