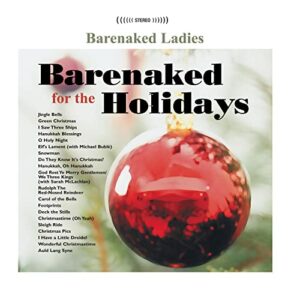 Perhaps begrudgingly for some, winter is coming—well, in terms of the weather where I am, it’s here today. But with the cold and the snow also comes the holidays. And while they may not look the same as in the past, hopefully we all find ways to adapt and still have some fun. Today’s featured band is solely about just that: music and fun.

Back in the late ‘80s, a couple guys started a band called Barenaked Ladies (BNL). If you want to read all about their background story, see a previous post here. When the band hit it big in 1998 with their hit record Stunt, they followed it up with another multi-platinum album in 2000’s Maroon. That album yielded another three commercial singles, and it seemed the band had permanently etched their name in music lore.

While the next studio album in 2003 was a bit of a flop, the band decided to change course, and do an album of holiday-themed tracks, including Christmas and Hanukkah tunes—and even “Auld Lang Syne” which is that traditional song you almost always hear on New Year’s Eve. It caused a bit of a rift within the band, since now-former member Steven Page admitted the album was not his idea. He wanted to go a more conventional route after the previous albums modest sales as to not alienate some fans further.

Yet, here we are, in October of 2004, and BNL decides to drop a holiday album and call it Barenaked For The Holidays. Of course, it contains some faithful interpretations of classic holiday standards, but most of it plays homage to BNL’s off-kilter spirit. The opening track “Jingle Bells,” for example, begins as a slow, normal rendition before busting through up-tempo and the childish lyrical variation about Batman smelling and Robin laying eggs. What’s different too is there are simply songs about winter and the upcoming seasonal changes. It’s not the simple ‘artist sings a dozen Christmas songs everyone knows’ type record. But you’d never expect that from BNL, since that’s not their style.

It features a couple collaborations including Sarah McLachlan and holiday album veteran Michael Bublé. And in the interest of the giving spirit, all the proceeds from the album were donated to the Stephen Lewis Foundation, which looks to turn the tide of the HIV and AIDS problems in Africa. Also, unlike most of their fellow artists, they put together an album of twenty songs, highly unusual for a holiday release.

Holiday records are often a love or hate endeavor. While they bank on enough people buying them to play in their cars to get in the spirit or listen around the house listening while wrapping gifts with big smiles, some people and critics are simply grinches. BNL ended up getting a ton of average reviews due to the quirkiness or even simply the fact it’s so evenly divided into songs by religious beliefs—calling that move “too PC”.

Barenaked For the Holidays was ‘Gold’ album certified by the RIAA with even more sales in their home county of Canada. What others may not know too; this was the first album by BNL released on an independent label after their aforementioned studio flop. So, they also had probably taken a few more creative liberties than they were allowed in the past, and that type of freedom must feel pretty good.

Barenaked Ladies are a feel-good time, giving you that jam-band energy and style no matter what kind of music they’re performing. This album is a perfect symbol of that ideology, and you can’t help but smile at their interpretations of classics. Start your holidays off right this year with a little BNL, it’ll feel just like you’re falling for the first time. Happy (start of the) Holidays!