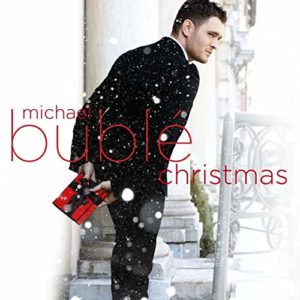 Some musicians are simply known for their vocal, so no matter what they’re singing about, you recognize the work. When it comes to Christmas music, while each artist has their own interpretation of the classics, they all tend to blend together. But given today’s featured artist’s voice, you’ll know from the first ‘up on the housetop’ who it is.

Michael Steven Bublé was born in British Columbia, Canada in September of 1975. Dad was a salmon fisherman of Croatian origins and mom was a homemaker. He has two younger sisters that also both turned out to be stars: an author and actress. Michael was bitten with the singing bug at an early age—he claims to have dreamt of being a singer since age two. Michael became fascinated by jazz music at age five when his family played Bing Crosby’s White Christmas album around the holidays. It was that very song that would get Michael noticed when he was 13 . He belted out the lyric, “May your days be merry and bright” on a family car ride, and they couldn’t help but be blown away. He’d get his break at 16, when his grandfather gave plumbing favors to club owners in exchange for Michael getting on stage. Grandpa also paid for his piano and vocal lessons, because he was convinced Michael would end up being a star.

In 2000, aide to former Prime Minister Brian Mulroney saw Bublé’s performance at a business party. He picked up a copy of Michael’s self-financed indy record and was smitten. He and his wife invited Michael to sing at their daughter’s wedding. It was at that ceremony where Michael would get introduced to Grammy Award-winning producer David Foster, and the rest as they say, is history.

Eight studio albums later, and over 30 million albums sold, it’s safe to say grandpa was right. Today I’m listening to his fifth studio effort simply titled Christmas, released in October of 2011. In December of 2011, the album rose to No. 1 on the Billboard 200, becoming his third to top the charts. Something a bit unique, Michael wanted to offer a fresh take on the standards by utilizing some duets. The song that inspired it all for him ended up being a duet with country icon Shania Twain. From a sales perspective, Christmas is far and away his best-selling album of all time. With nearly 20 million sold worldwide to date, his next most-popular record is right around five million. The only album that outsold Bublé’s Christmas during all of 2011 was Adele’s blockbuster record 21.

Whether it’s his fine vocal, appearing on television or his recent adds proclaiming to rename a popular brand of canned sparkling water, Bublé has just about appeared everywhere in the mainstream. He even took part in the torch relay to kick off the Vancouver Olympics in 2010. Michael has stayed very active in the business, releasing albums consistently since 2003, but his career stalled for a bit in 2016 when his oldest son Noah was diagnosed with cancer. He cancelled his tour and put everything on hold opting instead to go with his son as he underwent chemotherapy and radiotherapy. Thankfully, his son is in remission—and Bublé is back to dazzling audiences with his performances.

In terms of Christmas albums, this one is a fairly fresh take. The classics are all done in such an upbeat fashion; they add a little zing and pep. The duets are a new idea too, which gives them a slightly different feel.

There is little doubt of Michael’s vocal talent, so why not give his holiday album a shot today? At the low price of under $8 bucks, it’s practically a Christmas miracle. You could wait to see if it shows up in your stocking, but how else will get you through this chilly Tuesday? Happy listening!