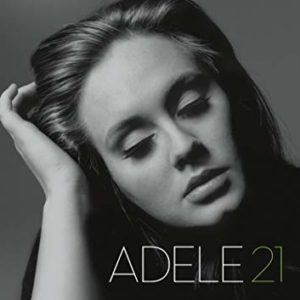 Instant success is one thing—but instant icon status? That’s incredibly rare. Today’s featured artist burst onto the scene about a decade ago, and in that short time since, has sold over 70 million albums worldwide and been nominated for eighteen Grammy Awards (winning fifteen of them). Needless to say, she’s doing okay for herself.

Adele Laurie Blue Adkins was born in May of 1988 in London. What looked to be a relatively normal upbringing changed when she was two years old and dad left the family alone. At a young age, Adele took up singing and became obsessed with different vocal sounds and tones. She’d often be singing instead of reading, and in fact, hasn’t read a book since she was six years old.

The family moved around quite a bit, as mom found different jobs in different cities. They settled in West Norwood which allowed Adele to attend BRIT School for Performing Arts and Technology. With fellow students Leona Lewis and Jessie J., Adele’s goal was to become an A&R master and help launch the next big artists. The school did an amazing job of nurturing her talents and maintained her interest in the business.

Four months after graduation, Adele recorded a three track demo and given it to a class friend. That friend posted it on Myspace where it blew up, and got into the hands of XL Recordings. They reached out and Adele thought it was a joke since she’d never heard of the label before. After taking a friend to a very real meeting and leaving with an offer, it all became a whirlwind from there.

Adele would release her debut album in 2008 to astounded success. In spite of cancelling tour dates unexpectedly and battling drinking issues, people simply fell in love with her voice and lyrical content. Today, I’m listening to her sophomore album 21 released in January of 2011. The title coincides with her age during the production process.

Upon initial writing, Adele was still in a relationship and the process was slowed due to cited lack of inspiration. She intended to compose a more upbeat, contemporary record to reflect her mood. After the relationship fell apart, she channeled her heartbreak and depression into all the songs featured here. Praised critically for the understated production values, a vintage appeal, and her outstanding vocal performances, the album’s performance drastically exceeded expectations. It would top the charts in more than 30 countries and was the world’s best-selling album of 2011 and 2012. It has sold nearly 40 million copies worldwide to date and netted her eight Grammy Awards.

If you’ve somehow managed to not hear Adele over the last decade, first off congratulations—but secondly, you’re missing a piece of art. Her vocals are probably the top five I’ve ever heard, and the raw emotion of her music really comes across no matter where you’re listening. Soul and Britpop don’t usually go hand in hand, but Adele does it flawlessly.

She’d likely be classified into the R&B charts, but in spite of her very throwback, general style, she crosses so many genres and fits almost anywhere. Adele even had to cancel two tours due to a vocal-cord hemorrhage, and still had all the success surrounding this album. She made her comeback at the 2012 Grammy Awards where she swept her six nominations. Adele has one of the most diverse vocal ranges in music history, all through teaching herself by listening to icons like Ella Fitzgerald and Etta James. Her vocal draws you in, and then her lyrics keep you coming for more.

Soft ballads may not be something you care to listen to every day, but give this one a shot today. If you move out of your comfort zone for one artist this week, have it be Adele. Her success hasn’t waned since 21, with a third mega-release and one more on the way. Rumour has it this record is pretty darn good, and it might just turn the tables on your Tuesday!

TDS and Earth Day: A half century in the making
The top cybercrime of 2018 might surprise you