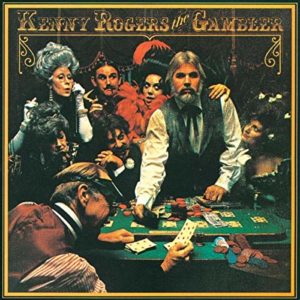 While some artists may be associated with a particular genre, a rare few quietly span multiple categories and media so successfully, they’re simply everywhere. Today’s featured artist was an icon, and one of the most highly regarded acts in history. This post is dedicated to the memory of Kenny Rogers 1938-2020.

Kenny Rogers was born the fourth of eight kids in August of 1938. Mom was a nurse’s assistant and dad a carpenter. He was raised in Houston, Texas and you could say he got his start around age 11 when he won a talent show at the Texan Theatre. Through high school he worked as a busboy and swept floors at the local hotel for $9/week. Kenny began a solo career in the late ‘50s—even sniffing a bit of success with a minor solo hit called “That Crazy Feeling”.

After sales slowed, he joined a jazz group called the Bobby Doyle Three who worked enough clubs in the south they had a decent fan following. Columbia Records would sign the group and they’d release three albums together before breaking up in 1965. From there, Rogers unsuccessfully tried another solo venture, joined two other groups, and began producing/writing for other artists—he even worked as a session musician for other performers.

After Rogers’ last band dissolved in 1976, he signed another solo deal with United Artists. Rogers saw some modest success early, but every album seemed to gain more and more popularity. Today I’m listening to his iconic sixth effort, The Gambler, released in December of 1978.

The album was an immediate hit, jumping to no.1 on the country charts and reaching no. 12 on the Billboard 200. It’s widely considered the album that established Rogers’ status as one of the most successful artists of the ‘70s and ‘80s. It was his first to reach obscure markets like the far east and Jamaica. Rogers would later comment, “When I go to Korea or Hong Kong people say ‘Ah, the gambler!’”

To date the record has sold nearly 40 million copies. The title track was so highly praised, it netted Rogers a Grammy Award for Song of the Year. Although Johnny Cash recorded the song first, Kenny’s version was released first. It was also his breakthrough into the pop charts, something most country artists weren’t doing at the time.

Kenny is simply one of those household names everyone seems to know. While not personally familiar with his catalog, tracks like “Gambler” or “Island in the Stream” are simply inescapable if you listen to music with any sort of frequency. He earned so many honors, it would be a whole blog entry just to list them all, but he’s one of a select few to receive the Willie Nelson Lifetime Achievement Award from the CMA’s and is elected in various halls of fame. What I didn’t really know, is Kenny also saw some success as an actor and even served as a narrator for various television programs. He was an amateur photographer as well and released multiple photo books in the ‘80s. If that wasn’t enough, he also collaborated with Kentucky Fried Chicken’s CEO in 1991 to start up his own restaurant chain, put his name on a Sprint car racing manufacturer, and even became a novelist. Kenny truly did a little bit of it all.

After an illustrious career that spanned an incredible sixty years, Rogers passed away while in hospice care just four days ago. Due to the current COVID-19 pandemic, the family is planning a small private service with a public memorial planned for a later date. What better way to pay tribute to a legend, give The Gambler a shot today. You never count your money when you’re sittin’ at the table—wiser words never spoken. RIP Kenny.