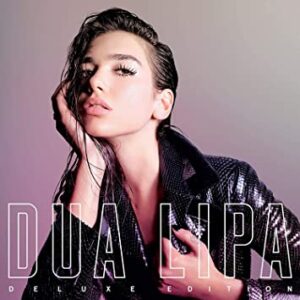 While I’m pretty in tune to what’s happening in the music world, there is simply too much stuff coming out to keep tabs on it all. Since I don’t listen to much current radio, sometimes I hear about musicians just browsing the internet. Today’s featured act is all over pop culture right now, so I guess it’s a good time to see what the fuss is about!

Dua Lipa was born in London in 1995. While you might think I’m breaking with Cheap Tunes Tuesday tradition and using her stage name first, you’d be incorrect—that is, in fact, her real, given birthname. She is the eldest child of Kosovo Albanian parents from what is formerly known as Yugoslavia. Both her grandfathers were historians and Dua has a better handle on her own lineage than probably anyone else in the world. Her dad was a lead singer and guitarist of a Kosovan rock band called Oda. Outside of his own compositions, her dad would cover artists like David Bowie, Bob Dylan, Radiohead, and Sting. Dua started singing around age five, wanting to be like her father. She began taking cello lessons and upon auditioning for the school choir, was told, “you cannot sing!” At age nine she took vocal lessons and went back and forth between London and Pristina, Kosovo. She committed to London at age fifteen to focus on music.

Part of her music career journey was uploading music to SoundCloud and YouTube. Some covers and some originals, she began gaining attention which ended in a contract with a management firm in 2013. The deal included her getting a monthly salary from the beginning so she could focus on writing. That she did, penning “Hotter Than Hell” which was held in such regard, it got her a deal with Warner Bros. Records. Recording began immediately on her debut album, but it took until 2017 to be completed due to issues with production and management. It’s going to sound strange, but the first single was released in 2015 and the last to be commercially release was in 2018. Very bizarre. Given all that, Dua Lipa hit shelves in June of 2017 (eponymous album). Critically it was a success, with most giving it a positive review. Critics loved its upbeat sound and some even referred to Dua as a “pop innovator”. Pretty much unanimously, they all thought she was headed for bigger and better things.

That logic may have been short sighted though because she didn’t have to wait for success—the album has sold millions of copies worldwide. It has achieved certified status in at least a dozen countries, including platinum in the U.S. and triple platinum in the U.K. It may not have hit the big time until 2018, but hey, better late than never. From a style perspective, I’m not even sure where I’d put this. It certainly has a little Pink to it —but it’s not a pop album in the true sense. But it’s also very different from say a Billie Eilish or Olivia Rodrigo. Where those albums tended to be a bit more “real” and melancholy, Lipa’s remains pretty upbeat but with a lyrical content that’s more similar to those artists. With eight commercially released singles, it’s hard to argue the success and when you merge that with sales figures, it does in fact seem Lipa is on her way.

Dua Lipa is all over the fashion scene now and has done some acting as well. She was recognized on the Time 100 Next List in 2021, has received six Grammy nominations and is starting to get known for her philanthropy and activism. She released her sophomore album in 2020, which led to even more worldwide recognition, but for now, give this one a shot. You might be catching your first glimpse at the next hall of fame artist!