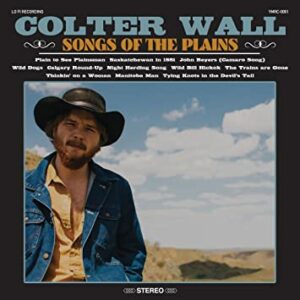 Picking up some totally unique music is always fun. Sometimes it ends up being totally in my wheelhouse, and other times it might be a one-and-done listen. Today’s featured act is not someone I’ve listened to before but might be the only act of his kind!

Colter Wall was born in Swift Current, Saskatchewan in June of 1995. His dad was a fairly prominent politician for our neighbors to the north. Colter had two sisters, one younger and one older and had a pretty normal childhood. He went to high school, and then studied at University of Saskatchewan at Saskatoon—and it was during school he started to think about music as a career. Colter began making demos of his songs and in 2015, he took a break from studies to focus on them full time. That same year, he released his first EP and started to generate a bit of a following.

Wall’s seven-song recording was done in Saskatchewan with a producer named Jason Plumb who is a relatively successful country artist in his own right. Also interesting, there’s tie between Wall and WWE/UFC that helped boost Wall’s profile. When he was just getting his start, Brock Lesnar noted Wall was his favorite artist during an interview in late 2015. From there, Wall’s popularity and notoriety rose sharply.

The rub from the Beast Brock Lesnar opened the eyes of other musicians, and Wall began playing shows with other artists. In 2016 he opened for a gig in Nashville that went so well, it got him a record deal with American Songs publishing company. His first full-length album hit shelves in May of 2017 and was pretty popular in Canada but didn’t make much noise here in the states. Fast forward to October of 2018 and Songs Of The Plains was released as Wall’s sophomore effort. The album hit even bigger in Canada than his first, and this time the U.S. took notice as well. He hit the Billboard 200 and got up to No. 2 on the Heatseekers chart. Since it also charted on the country and folk lists as well, it gives you a small idea of what type of music he plays. Wall lists his influences formally as Johnny Cash, AC/DC, Black Sabbath and Led Zeppelin. Cash was what played at home, and the rock bands were his rebellion phase with friends and his inspiration behind learning to play guitar.

Canadian country is certainly a new genre across my headphones. I honestly can’t think of any other country artist from Canada—other than the crossover types like Anne Murray or Shania Twain. Colter Wall is definitely not a crossover artist. In fact, I’m a bit surprised on the ‘folk’ label in spots, because this is about as country music as Hank Williams.

The fact he listed Johnny as an influence is no shock when you listen. It’s got that 50’s country feel—something that fits sitting on the porch, sipping a lemonade after tending the horses. It’s as laid back as a warm summer day in the country. If that’s your thing, this album is unquestionably for you—and even if it typically isn’t, you may dig this anyway. Something about his super-deep voice is soothing, and lyrically it feels like he’s got something to say, even if it takes you a few listens to catch it.

Critics gave this record generally favorable reviews. Songs of The Plains has an average of about 8/10, which certainly isn’t bad, but I personally feel like that doesn’t give Colter enough credit. Maybe tons of other artist are doing country like this, but it feels like a unique throwback to me—even with the Hank Williams style howls. Give this guy a shot today, listen to the tales of the great Canadian prairies he once called home. Happy Tuesday!

How scammers get your email
Cheap Tunes Tuesday: Haddaway