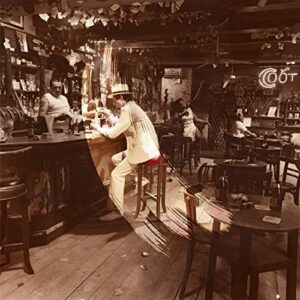 Cheap Tunes Tuesday: Led Zeppelin, In Through The Out Door

One of my favorite ways to digest music is cranking up the volume on the car stereo during a long road trip. Recently I traveled around the great state of Wisconsin, accumulating over 800 miles, and rehashing some excellent tunes. Today’s featured album popped up on random, and boy, it’s an underrated one.

When you utter the words Led and Zeppelin back-to-back, you’re invoking the name of a group that has pretty unanimous praise for their music and the mark they left on the industry. I’ve talked about them before, but that focused solely on their early days and the debut album. And before you get ahead of yourself, I know what you’re thinking—that I’m definitely going to focus on probably the best album ever created: Led Zeppelin IV. While that would be an easy one to gush about for 700 words, I’m going to go with a more recent, and deeper cut. It started on my road trip with the single “South Bound Saurez”—which doesn’t really feel like a Zeppelin tune at all. That sort of summarizes the album it’s off of perfectly. You either appreciate the newfound sound and dynamic, or you yearn for the early days of smash-mouth rock.

In Through The Out Door came out in August of 1979, ten years after Led Zepplin’s debut. Zeppelin had been through a lot as a band by that point. Robert Plant’s son passed away in 1977 and the group was exiled from the U.K. due to taxation issues for two years. Those experiences set the stage for the title—feeling like they were trying to get back in by using the exit door—both in terms of coming together as a group and finally playing in their home country again.

Plant and John Paul Jones primarily wrote and composed the record, a departure from Jimmy Page and John Bonham in prior works. Because of that, the latter two would show up late and took to the life of drinking and drugs. They hustled through the recording process, only taking three weeks at Polar Studios in Stockholm, Sweden. None of that prevented the album from being a huge success though. It hit No. 1 on the Billboard 200 on the second week in the U.S. and did the same in Canada and New Zealand. The average music fan sometimes laments Zeppelin’s later catalog like this one, but the sales tell a different story. Twenty million sold—similar numbers to their debut and third albums.

Critically, reception was equally divided—just like the fans. Rolling Stone felt Page’s diminished role in the album made it fall flat. Melody Maker said, “the impressionable first play had everyone in the office rolling around laughing” and claimed the band was “totally out of touch”. Others, like The Village Voice, said it was the best album since “Houses of the Holy” in 1973.

It was a departure in sound for sure. They used some synth, something they hadn’t done before, but was simply a sign of the times. At only seven tracks deep and just over forty minutes of run-time, it’s certainly far from a masterpiece. A couple of the tracks are forgettable, but the ones that stand out hold up against singles from any other period in their discography. My final top three were a bit tough to narrow down, but I’ll listen to them along side my other favorites like “Dazed and Confused”, “The Ocean” and “Kashmir” any day of the week.

About a year after In Through The Out Door was released, John Bonham passed away and Led Zeppelin was no more. If nothing else, this release is historical since it’s the last album released while they were still a band. There have been a few reunions over the years, and their status as absolute legends hasn’t waned whatsoever with the proceeding generations. Gen Z kids know Zeppelin and listen to them as much as myself or my parents. For that reason alone, throw this one on today. Maybe you’ll be divided too—but I’ll be shocked if you don’t enjoy at least the top three. Happy Tuesday!

Law&Crime now on TDS TV and TDS TV+
Warning: Even the FTC is being used in a phishing campaign