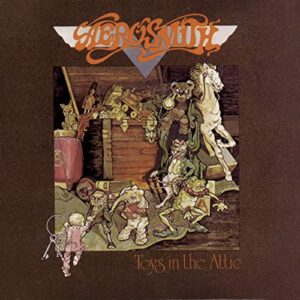 Lock in step with last week’s mighty post, I thought about another solid band that I’ve either never covered or only talked about once. Today’s featured act is as close to being on the musical Mt. Rushmore without probably being there, but I know several that would disagree they’ve been left off. Since you’ve heard them a billion times, let me know what you think!

Back when I was still in my blogging youth, I talked about Pump, which was a super successful Aerosmith album that came out in 1989. That was almost two full decades after the band formed though—so I skipped over a huge chunk of their history and got to my personal favorite album. I was reminded of their impact on culture when I was watching “The ‘80s: Top Ten” featuring Rob Lowe on the National Geographic channel on TDS TV+. One of the topics was the hip-hop revolution that started with Run D.M.C.— and one of the catalysts behind their mainstream popularity was none other than Aerosmith. Together they took a mid-‘70s rock standard and turned it into a mash-up duet. The video was fairly groundbreaking as it literally showed the genres breaking down the walls and creating collaborations that would ultimately become the standard for all hip-hop/rap artists of the future. If not direct collaboration, the use of sampling would become iconic.

But this isn’t another post about Run, this is about Aerosmith.

Tracking back to the ‘70s, Toys In The Attic was commercially released as their third studio album in April of 1975. Coming off a fairly successful sophomore record, they began working with a new producer and seeing a lot of time on the road. Because of that, they all felt simply “different”, and agreed they were becoming better musicians—which really showed in Joe Perry’s riffs. Fans and critics alike agreed. This third album was considered a major jump in sophistication. Part of the reason was likely because it was the first time they started an album from scratch. Their first two were tracks they’d been playing live for years, but the band thrived when they were forced to be creative. The iconic “Walk This Way” which made the famous crossover years later, all started with Perry just goofing around with a riff. Steven Tyler overheard, got behind the drums and just started jamming. He started scatting nonsensical words to get a feel, and a week or so later, the monstrous track was born.

Critically, we’ve seen a lot of unanimous five-star albums on this blog before, and this one won’t be an exception. Rolling Stone ironically gave it an initial negative review, suggesting it didn’t compare whatsoever to their prior record. Later, some of those critics wised up—some even comparing them to Led Zeppelin. Toys In The Attic peaked at No. 11 on the Billboard 200 and spawned three commercial singles. That may not seem like a big feat, but since it was only nine tracks total, and two of the songs are beyond iconic even to this day, it’s a pretty big deal. And speaking of Perry’s magical riffs, “Sweet Emotion” is referenced as one of the best openers in history. Many modern guitarists cite it as the first riff they heard where they had to grab an axe and start strumming immediately. And if you’re still not convinced, it’s Aerosmith’s top selling album of all time, with nearly twenty million sold worldwide.

There are occasional shows still today where you can see Aerosmith live, but they haven’t put anything new since 2012. But with a catalog as extensive as theirs, why would you? Their legacy is second to just about none, and they have all the sales and fans to back it up. I talk about things and nobody cares, but don’t let this be one of them! Happy Tuesday!