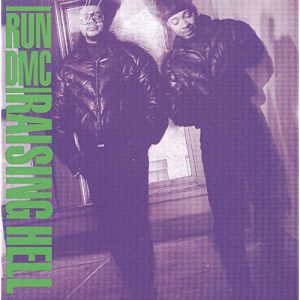 Recently I navigated through a six-part documentary called “Hip Hop Uncovered” on FX. While it’s for more mature audiences, it did a phenomenal job outlining the history of rap music and its ties to gang culture within overall society. That feature inspired today’s blog post, I’m excited to get into it!

Joseph Simmons, Darryl McDaniels, and Jason Mizell all grew up in Hollis, Queens in New York. Joseph’s older brother Russell was an up-and-coming promoter and recruited him to get into the business. Joseph got his start by DJing for established acts like Kurtis Blow, and started to call himself DJ Run. Darryl was fixated on sports, but began to DJ as well after purchasing a set of turntables—going by the name Easy D. The two started to hang out together hoping to rap for local DJ’s that performed in the area—and one of the most popular was Mizell, known as Jazzy Jase. Finally, Run and Easy D got that chance and the three became instant friends.

They all finished high school in 1982 Run and D convinced Russell to let them record as a duo and added Mizell who was now going by Jam Master Jay. Russell changed Easy D to DMC—and the group started going by Run-D.M.C, which no one liked at first. They got a deal with Profile Records and released their debut single in 1983. It was very well received, and they started to generate a legit following in New York City.

I’m going to fast forward through a couple years and get to Run-D.M.C’s third studio release Raising Hell that hit shelves in May of 1986. Produced by Russell and Rick Rubin, the expectations around this album were never seen by hip hop before. The guys had been perfecting rhymes and styles while on an extensive tour in 1985. They hit the studio running and felt they had something special. Rubin and Russell merely added their spices to the end product, making it feel incredibly polished. The recipe resulted in the first platinum and multi-platinum selling hip hop record in history.

Raising Hell sold a million copies in just under two months and three million by April of 1987. Approximately ten million have sold worldwide to date. It maneuvered all the way to No. 3 on the Billboard 200, something unheard of at the time for the genre. Part of the mainstream success was a result of their crossover track “Walk This Way” with mega rock group Aerosmith. Before that collaboration, hip hop simply wasn’t part of pop culture throughout the entire U.S. and the single exposed people from all walks of life to something new.

At the time, critically speaking, reviews were all over the place. You can chalk that up to most critics simply not understanding what good hip hop was. In more contemporary reviews, the record is a unanimous five star across the board. Rolling Stone has it at 123 on their best 500 of all time—and comedian Chris Rock noted it was the first great rap record to ever exist. And with that sort of impact in mind, it’s almost impossible not to give this album its proper due. It launched an entire brand of music into the world, one that sells billions of dollars’ worth of music in modern culture. Run-D.M.C. paved the way for artists in the 90’s through today to have a platform they otherwise may not have had. From a style perspective, this isn’t modern rap if that’s what you’re used to. These guys were lyricists, pure and simple. Sure, they had great beats and drops too, but the rhymes were the focus. And groups like Run-D.M.C. often had a message behind their raps. They moved the genre away entirely from the funk and more disco-oriented feel it had before, and it changed the game forever.

They kept making music and appearances throughout the ‘90s. Sadly, Jam Master Jay was shot and killed at his studio in 2002. Run and D are still part of the business today and maintain their rightfully deserved spot on hip hop’s Mount Rushmore. This type of music isn’t for everyone but give it a listen sometime. It’s tricky—you might just their speech is your recital. Happy Tuesday!

Bally Sports App Not Working? Here’s how to Fix It
Honoring TDS’ female engineers on INWED