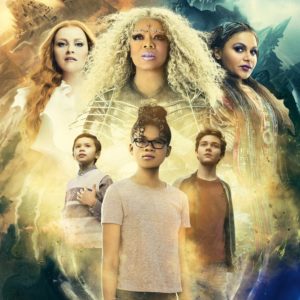 This month, TDS TV on Demand is bringing a wide variety of films to your living room. First is Disney’s take on the classic Madeleine L’Engle novel, “A Wrinkle in Time.” Second is the critically acclaimed teen coming-of-age story, “Love, Simon.” Third is the faith-based drama “I Can Only Imagine.” And finally, for the little ones, there’s the silly—but enjoyable—“Sherlock Gnomes.”

Based on the classic novel by Madeleine L’Engle, “A Wrinkle in Time” is a dazzling, visual fest about a girl who enters another world in search of her father. At times the story gets overwhelmed by its own ambitions, but it’s hard to fault a film that celebrates imagination and science. As a note, the film is dramatically different than the novel—so keep an open mind going into this film that things will be different. As with many beloved novels, when things get altered in such a fashion it can be difficult to enjoy the vision the filmmakers have brought to the screen. The cast includes Storm Reid, Oprah Winfrey, Reese Witherspoon, Chris Pine, Mindy Kaling and Zach Galifianakis.

HOW TO TALK TO GIRLS AT PARTIES
Available June 5. Rated R.
Copyright A24

This is a strange film. An alien touring the galaxy breaks away from her group and experiences freedom with a group of young punks in London. “How to Talk to Girls at Parties” is a mishmash of sci-fi, teen angst and horror destined to find a niche in the cult classic film section. It sometimes works, it sometimes does not—but it never lags in its energy—meaning it is never boring. Our recommendation is to watch the trailer. If it looks interesting, go for it. Elle Fanning and Nicole Kidman star.

Simon Spier is a teenage boy who has a secret: he’s gay. When that secret is threatened, Simon—and many others—must come to terms with his identity. “Love, Simon” is a smart, funny coming-of-age tale. The film avoids being too heavy-handed and overly saccharine, but does not shirk from tenderness and compassion. Nick Robinson is excellent in the lead role, as is Jennifer Garner as his mother.

When all the other gnomes and garden ornaments disappear, Gnomeo & Juliet call on detective Sherlock Gnomes to investigate. “Sherlock Gnomes” is a serviceable kids film with a nice message and great visuals. The pace is brisk and jokes never let up. Is it great? No. But will the kids enjoy it? Absolutely. The film is aided by a good cast, including Johnny Depp, Emily Blunt, Mary J. Blige, Chewetel Ejiofor and James McAvoy.

I CAN ONLY IMAGINE
Available May 22. Rated PG.
Copyright Lionsgate

Uplifting and inspiring, “I Can Only Imagine” is the story behind the MercyMe song of the same name—which happens to be the best-selling Christian single of all time. Like many faith-based films, “I Can Only Imagine” plays best to its core audience, but the film does a nice job of transcending its roots due to a good cast and an honest story.

A Wrinkle in Time, How to Talk to Girls at Parties, I Can Only Imagine, Love, Sherlock Gnomes, Simon