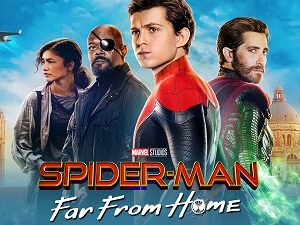 Spiders, Toys, and Lions now on TDS TV On Demand

The weather may be getting chillier, but the movies on TDS TV On Demand are hotter than ever! Tune in to watch the latest Spider-man, Toy Story, and The Lion King—plus a lot more (some even selections perfect for Halloween). Grab your remote and get watching.

This is the first Marvel movie set after Endgame and Peter is grappling with Iron Man’s absence. Not sure how he fits into the world without his mentor, he just wants to take a vacation and go on a European trip with his class. Unfortunately for Peter, he has to put on his spidey suit and give Nick Fury a hand to beat some elemental danger. This movie earned a 95% Audience Score on Rotten Tomatoes for a reason—it’s just that good.

You might think a nine year delay since the last Toy Story movie means this one won’t be good—but you’d be wrong. Earning a huge 97% Critics Score and 95% Audience Score, it’s a franchise that keeps on giving. Woody, Buzz and the gang are back along with some new toys (including Forky, a spork who has become beloved by the child who made him). It’s charming, sweet, tear-inducing, and funny—you just can’t miss with this one.

Kumail Nanjiani (The Big Sick) plays Stu, an Uber driver who ends up picking up detective Vic (Dave Bautista, of Guardians of the Galaxy and WWE) who is hot on the trail of a killer. Stu gets sucked into the chase and they become oddball partners and, as you might expect, hilarity ensues. This is a light and fluffy buddy comedy and, although it doesn’t break any new ground, might just hit the spot.

Do we even need to tell you about this one? You know the plot, you know it’s live action, so let’s focus on the amazing cast: Donald Glover, James Earl Jones, Beyonce, Chiwetel Ejiofor, Seth Rogen, Bill Eichner, John Oliver, Keegan Michael Key, Alfre Woodard—so many great actors (and more) all in the same movie. It’s visually stunning and has great source material so it should definitely be on your watch list.

This movie may have slid under your radar when it was released in theaters, but don’t let it do the same On Demand. This drama has a fantastic ensemble cast featuring Octavia Spencer, Naomi Watts, Kelvin Harrison Jr., and Tim Roth. The movie centers on Luce Edgar, an all-star high school athlete and debater. Is Luce who his parents think he is? Who is teacher thinks he is? There are a lot of themes at play about race, power, reality, perceived reality and this movie will keep you guessing and talking long after it’s over.

We won’t go too much into detail about these other top picks, but they’re perfect for Halloween!