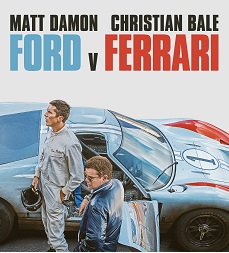 With six films and a total of 13 Academy Award nominations, there’s a lot to love on TDS TV On Demand in February. We’re honestly not sure it’s possible for you to make a wrong choice! Maybe it’s best not to choose and simply watch all of these great movies:

Based on the Stephen King book of the same name, this very compelling horror movie is full of twists and brings you back to The Shining universe. Danny Torrance, now much older, still carries the scars from what he endured as a child—and is battling his own supernatural gifts (and others with similar powers). With great audience and critical reviews, this chilling movie is a great next chapter in the story.

Nominated for four Oscars (including Best Picture), the movie is based on the true story of Carrol Shelby (played by Matt Damon), and Ken Miles (Christian Bale). This stylish and entertaining film follows the pair as they are tasked with building a Ford racecar to beat Ferrari at the famous Le Mans race. Even if you’re not a racing fan, this is ultimately an engaging people story—and one worth your time.

You may think this movie is about Mr. Rogers—and it’s not that it isn’t—but it’s more about the impact Fred Rogers had on those around him. Inspired by an actual magazine story published in 1998, the film follows a troubled journalist after he interviews Rogers for a story. It’s heartwarming, the performances are amazing (with Tom Hanks getting an Oscar nod for his efforts), and has a giant 95% critic score (and 92% audience score) on Rotten Tomatoes. This one is a real, heartwarming, winner. (Note: if you’re a crier, bring Kleenex!)

Described as an anti-hate satire, this six-time 2020 Oscar nominee is a very unique comedy/drama film. Set during World War II, a lonely German boy’s (Jojo) world is rocked when he realizes his mother is hiding a young Jewish girl in their attic. With his imaginary friend Adolf Hitler, Jojo confronts his blind nationalism. Taika Waititi—of Thor: Ragnarok and Hunt for the Wilderpeople fame—directs (and stars as Hitler). The creative story-telling (including musical montages) results in a funny, moving, and emotional story. There’s a reason audiences and critics alike love it.

Don’t let the name scare you off—this is actually a movie teens and parents can enjoy together (and it isn’t a horror movie!). Director Rian Johnson takes a page out of the Agatha Christie whodunit playbook but adds a modern and black humor twist. This smart film (with one Oscar nomination) will keep you guessing and laughing all the way to the finish (and at least one reviewer said the last shot in the movie is one of the best in cinematic history!).

It’s the sequel to Frozen—do we need we say more? Elsa, Anna, Kristoff, Olaf and Sven return and set out on a dangerous journey—one the Disney fans in your home (whether they be young or old) are sure to enjoy. Although it was snubbed for Best Animated Film, the movie was nominated for Best Song for “Into the Unknown.”

The Good Liar: Helen Mirren AND Ian McKellen? This is definitely worth a watch (and has the reviews to prove it). The drama starts on February 4 and this one is rated R.

Last Christmas: We admit that critics didn’t love this one, but audiences sure did (and who can resist a soundtrack featuring the late, great, George Michael?). This romantic comedy starts February 11; rated PG-13

Midway: Another case of audiences loving what critics didn’t, Midway is based on the real-life events of the Battle of Midway. Starts February 18, Rated PG-13