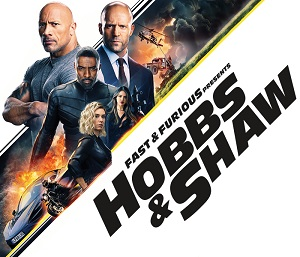 Be thankful for great movies arriving on TDS TV On Demand

Daylight savings is over, but that’s okay—it just gives you more time to curl up and watch the great movies coming right to your living room. TDS TV On Demand has a great range of offerings this month, including movies perfect for watching as a family.

An offshoot of the always-popular Fast & Furious franchise, this latest movie bets on the chemistry between Hobbs (Dwayne Johnson) and Shaw (Jason Statham)—and it’s a bet that pays off. Hobbs and Shaw work together to take down a cyber-genetically enhanced anarchist played by Idris Elba. Fun fact: Helen Mirren also returns an appearance as Shaw’s mother. The smack talk and star power work, earning this film a perhaps-surprising 67% on the Tomatometer and 88% Audience Score.

Based on the best-selling book, The Art of Racing in the Rain is as warm and fuzzy as your canine companion. The story follows the life of Denny Swift (Milo Ventimiglia), an aspiring race car driver and his dog named Enzo (Kevin Costner )—only in this tail tale, the story is told from Enzo’s perspective. Through life’s ups and downs, Enzo is there to help Denny and offers to the audience his observations and wisdom. It is, by all accounts, a movie that will make you chuckle and also make you cry so have your Kleenex at the ready!

This is the rare sequel that actually is better than the original. In this installment, there’s a new threat to both Bird and Pig island. The usually-at-odds groups form an unsteady truce and unlikely team to save their homes. It’s bright, fast-moving, and has funny moments for both kids and adults earning it solid marks from both critics and audiences alike.

Just because it stars young kids, Good Boys is NOT a family movie—but it is funny as heck for adults to watch. Knowing this film comes from the people who gave us Superbad, Neighbors, and Sausage Party gives you some indication of the kind of humor you’re going to find. The movie follows a group of 12-year-old boys who try to do a little research on kissing by spying on teenagers using a parent’s drone. Things go hilariously wrong and the boys undertake an odyssey to try to replace the drone before they get caught.

Using the music of Bruce Springsteen, this movie is completely charming musical that will likely enchant even folks who say they don’t like them. The story follows a teenager, Javed, who yearns to escape his hometown and the rules of his traditional Pakistani household. When he discovers The Boss, Javed finds inspiration and confidence in the lyrics and music—and you’ll be cheering for him. It’s described as a “life-affirming” film—and who doesn’t want to watch something like that? Don’t miss this top-rated film.

If you’re old enough to order this on Video On Demand, you know who Dora the Explorer is. What may not know, however, is that this movie is actually good. My teens mocked the commercials, but this movie earned an 84% Certified Fresh rating AND a huge 88% Audience Score on Rotten Tomatoes. In this adventure, Dora leaves the jungle to attend high school and, along the way, must save her parents and solve the mystery behind a lost city of gold. It’s the perfect movie for the entire family.