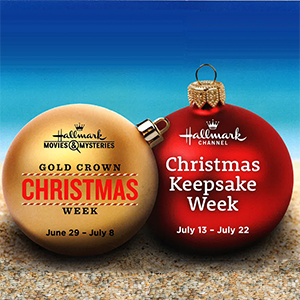 Christmas in July on Hallmark

July is just days away—that means it’s time to plan a barbeque, grab some sparklers, turn up the air conditioning, and watch some Christmas movies!

Just like stores have Christmas in July sales, Hallmark Channel and Hallmark Movies & Mysteries are getting into the action. They’re showing more than a hundred holiday movies in the middle of summer (buzzkill: Christmas is only 180 days away!).

Each channel is showing Christmas movies for a so-called week (although technically it’s more like two weeks). Read on to find out which channel is playing what.

Starting June 29, you’ll find at least three movies every weekday evening, and at least 10 every weekend day. In fact, by my count, there are 57 different movies you can watch!

As an admitted Hallmark movie addict (you can find my confession here), I have to say I’ve seen the majority of the movies on the schedule. As such, here are some of the movies from 2017 I recommend watching:

I missed Romance at Reindeer Lodge last year, so I plan on setting the DVR so I can watch it now.

Staring on July 13 and ending July 22nd, Hallmark Channel promises to play your holiday favorites. Here’s the schedule and it includes lots of movies from last year’s Countdown to Christmas.

Of last year’s Countdown movies, some of my favorites are:

I am hoping to watch Christmas Getaway is on which I missed, and also maybe Christmas Connection. Full disclosure: I could not bring myself to watch Switched for Christmas last year, and I don’t see that changing—but it’ll be on if you’re interested.

Reminder: Don’t forget to print off some Christmas Movie Bingo cards to have some extra fun!

8 Responses to Christmas in July on Hallmark