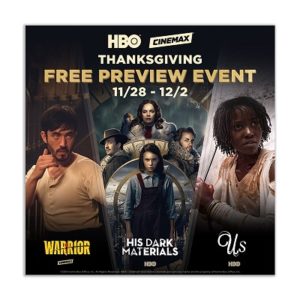 Great Black Friday deals may be coming but nothing is better than FREE.

Starting on Thanksgiving you get FIVE days of FREE HBO and CINEMAX on TDS TV!

Tune in starting at 6 a.m., November 28 and enjoy all the great shows and movies until 6 a.m. Tuesday, December 3. Which, of course, means you should give us a call at 7 a.m. on that Tuesday to order both channels so you can keep enjoying them every day of the year 🙂 .

His Dark Materials, HBO
Based on Philip Pullman’s beloved books, the series follows Lyra on her quest to find her kidnapped friend.  The series stars Dafne Keen (who you may remember from the movie Logan), James McAvoy, and Lin-Manuel Miranda.  It looks amazing!

Watchmen, HBO
Certified Fresh with a 96% Rotten Tomatoes Tomatometer score, this dark comic book-based series is anchored by the amazing performance of Regina King.  It’s being called “intricate” and “fearless” this series is a must-watch.

Silicon Valley, HBO
It’s the final season of this Emmy-Award winning comedy centered on five young men trying to make it with a start-up.

And don’t forget, also on HBO:

There so many movies to watch over the five days of the free preview it’s a veritable Thanksgiving cornucopia of riches, but here are a few highlights based on the HBO and CINEMAX schedules.

Yes, this free preview weekend includes all the on demand content from HBO and CINEMAX too!  That opens up even more possibilities for you to watch (Game of Thrones, anyone? How about Westworld? The Knick? Jett?). Access it all within your On Demand library on TDS TV.

Really, you can’t miss. Tune in and enjoy the free preview while it lasts—and then call 1-888-225-5837 or go online to add these channels to your TDS TV programming package permanently. You’ll be thankful for the fabulous shows and movies available at the touch of a button in your TDS TV guide all year long!