What’s Up With My WiFi?

In the last decade the Internet has undergone transformative changes, both in the way service is delivered to customers and the way customers utilize their Internet connection.

Nowadays, when you look around your home it is nearly impossible not to see dozens if not more wirelessly connected devices. Your smart phone, your gaming system, your Netflix set-top box—even your thermostat and the speaker in your living room—they’re all examples of technologies which utilize wireless Internet connections to deliver a variety of services to our customers.

Every day I speak with TDS customers from around the country who have questions about how their Internet service works. In the course of supporting those customers who make use of our wireless modems and routers, I have come across a number of common problems that people face, both in connecting to their network and in using it to its fullest capacity.

Our mission today, should you choose to join me, is to explain some common misconceptions regarding wireless technology and arm you with some of the tools you can use to combat them.

Before we get into specific problems, it is worth taking a few moments to better understand what WiFi is and how it works.

WiFi is a data delivery system that utilizes an antenna capable of broadcasting a signal on the 802.11 protocol. The Internet connection is delivered to your home a number of ways, including (but limited to) traditional copper telephone lines, or high-speed fiber optic cable, where it is then converted into a radio signal that can be received by wireless-enabled devices.

In layman’s terms what this all means is that your Internet service comes into your house via a hard-line connection of some sort and is converted into a WiFi signal by your modem or router. If you’re having problems with your WiFi, that’s always the first place to start.

Making WiFi Work For You

Now that we have a very basic understanding of the concepts and hardware, let’s look at some of the top problems people face when it comes to WiFi and how to combat them.

WiFi is a tricky technology, and there are a multitude of factors that can cause you to receive low signal strength. In many cases, this is nothing more than the modem or router having aged to the point where its ability to broadcast has decreased. This isn’t unusual, and is something to be expected of any piece of electronics that is left turned on for days and weeks on end.

In many cases, however, the issue is not resolved by simply replacing the hardware. Outside of simply getting old, the most common culprits when it comes to low signal strength are obstructions, or objects situated between the router and device you’re trying to use.

Like any radio signal, WiFi is vulnerable to being blocked or interfered with by common household objects. This includes anything from the obvious things such as appliances, stairs, and floors, to not-so-obvious things such as ventilation shafts in the walls, fish tanks, and even certain ceramics.

When situating your wireless router, remember to consider what communications professionals call “line-of-sight”, or LOS for short. Imagine drawing a line from your router to the device you are attempting to use and ask yourself whether that line passes through anything that which might interfere with the signal. If the answer is yes, then you may have found the source of your problem. And please, please do not place the router inside a large metal box or in the deepest recesses of your entertainment center. Yes, this happens.

For a full troubleshooting guide for optimizing your WiFi signal, check out this blog. And, if you decide you want to try to hide our router, just make sure you don’t believe everything you read on Pinterest—some of those ideas may be pretty, but are terrible for reception.

2. The Curse of Competing Channels

If you’ve already gone through the steps to place your router in the best possible location, and your signal strength is still low, it may be time to dig a little deeper.

When you look at your computer or smart phone and pull up a list of available wireless networks, you will most likely see quite a few. Unless you live in a rural or otherwise isolated area, the average home will receive many signals from different wireless networks. The more networks you see on that list, the more “noise” there is for your router to cut through. What’s more, there are any number of items that are common in many homes that are using that same the frequency as WiFi to communicate. Cordless phones, some remote controlled cars, baby monitors, garage door openers, and even microwaves all use this little slice of spectrum to talk to each other.

In fact, do you want to know just how crowded the radio spectrum is? Here’s a graphic that’s sure to wow you from the National Telecommunications and Information Administration: 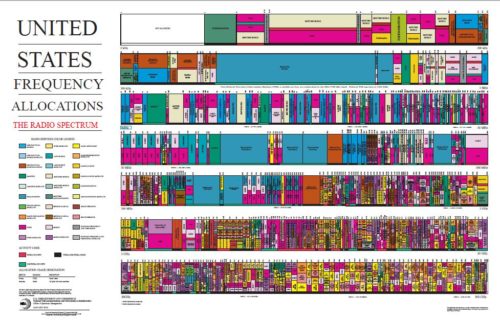 Clearly there’s a pretty crazy amount of radio waves out there!

When trying to cut through that noise, the first thing you’ll want to do is get the lay of the land. This will require a little work, but you can download free apps or tools to help provide a list of WiFi networks within range, their signal strength, which of the available channels they’re using. [Note: as always, there’s a risk using free software—you know what they say: when something’s free, you’re the product!] Some routers will automatically select the best or least-congested channel whenever they are powered down and powered back up, but others will not.

Once you know where the existing noise is coming from, you can troubleshoot your router and device placement.

3. The Drag of Old Devices

Let’s start with a very important WiFi fact: when you have older devices connected, your router’s antenna-no matter which router you have-will only communicate with your devices at the speed of the slowest device. Many routers now have multiple antennas to minimize the issues this can cause.

Think about it like this: if you’re on the road and stuck behind an old car or a tractor in a no passing zone, you’re going to go slow too (and so is everyone else behind you). It doesn’t matter if you’re driving a Ferrari—you’re not going to get anywhere fast. The same is true for your home WiFi. Removing those old devices off your network will let the new tech move faster. Note: just having older gadgets in your house isn’t a problem as long as they’re not connected to your network. It’s like having that old Ford Model T in the garage for show—as long as it’s not on the road, it won’t slow anyone down.

As of this blog update, the most current WiFi standard is called 802.11ac (real catchy, amiright?)—and a new one, 802.11ax is on the horizon. Devices that use the older standards (802.11 a, b, or g) are simply not capable of connecting at the same speeds as newer ones.

Hot tip: Even if you feel like your device is pretty new, it may be worth checking to see if it’s using the current WiFi protocols (at least 802.11n, but 802.11ac is better). OSXdaily offers advice for finding out what protocol your Mac is using. If you use a PC running windows, the Dummies guide folks have some instructions for Windows 7 and Windows Vista. Google says that all Chromebooks support 802.11n.

It may sound counterintuitive, but it’s true—speed isn’t always everything. When it comes to WiFi, sometimes it’s about finding a balance between speed and range.

Many of the routers we provide support both frequency bands, and some of our devices even have multiple radios operating in the same band, which helps multiply the max capable traffic and support more devices simultaneously. But the moral of the story here is this: sometimes your device will connect to the “slower” frequency band, and that’s not always a bad thing. It’s probably doing it that way because it is the fastest based on the current circumstances.

Let’s all admit one thing: passwords are the bane of our existence. Whether a technical support professional or an average customer, everyone has more passwords than they care to count. There’s the password for your bank, your power company, your beloved internet service provider and, most of all there’s the password for the WiFi. Without that password, life can seem impossible. Your Kindle or iPhone is rendered useless and all seems lost. I’ve even spoken with parents who routinely withhold the wireless password as a way of encouraging lazy children to complete their chores.

Often times we will receive calls from customers who have either forgotten their wireless password or have had it mysteriously change on them. Now, sometimes this is the result of a little bit of amateur networking on the part of an enterprising youngster, and sometimes it’s something as simple as a power surge having hard reset the router.

In either case, there is always hope when it comes to wireless password. We have a new blog Where is my WiFi Password and SSID for more help if you haven’t changed your default WiFi password—but we certainly hope you already have.

The default password for any router is, in hacker circles, well-known. Heck, even a very curious or inspired neighbor could probably figure it out by doing a little Googling. Once on your network, hackers can do bad things like use your network for illegal things, upload malware designed to steal your personal information, and more—but even benign borrowers of internet bandwidth can slow you down.

Now that you know you need a better password, make it a good one (changing it to “123456” is certainly not going to make your network more secure!). Follow best practices (upper and lower case letters, number and symbols, unique, etc.), and consider changing it a few times a year just to be on the safe side. The side benefit of changing it? If you’re a parent and have some chores your kids need to done, I’d suggest changing it and holding it hostage until you get what you want. You’d be surprised how quickly kids can move when their access to copious amounts of kitten pictures is cut off.

Knowing is Half the Battle

We’ve come to the end of our brief trip down WiFi Way. Hopefully you’ve learned a little bit about the technology you use in your home and feel at least a little better armed when it comes to fixing some of the problems that crop up. There will, of course, be issues that come along which were not covered here. When this happens, we always want to hear from you. Providing quality customer service is a top priority at TDS, and we’re always eager to answer questions from our customers.

Editor’s note: This post was originally published July 8, 2013 and has been completely revamped and updated for accuracy and comprehensiveness.

20 Responses to What’s Up With My WiFi?