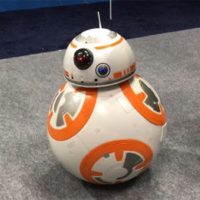 This week: new toys coming (including what might be the best BB-8 toy EVER), high-tech hair dye that gives you chameleon-like hair, multiple pieces of BIG NASA news, Insta will be rolling out a new feature, and human exoskeletons aren't just in the movies anymore,
Read full story

This week: new cars you probably can't afford (but man do they look gooooood), 33 million Twitter passwords and usernames were stolen, and Google's co-founder is placing big bets on flying cars. Also check out a new Bluetooth toothbrush, get the scoop on a possible folding OLED phone coming next year, and find out what's being rumored for Apple's conference next week.
Read full story

Some top tech news highlights for the week: Apple rolls out new-ish stuff, Pebble smartphone trims their staff, McDonald's is rolling out VR googles using a Happy Meal box, and how to score a Tesla 3. If that wasn't enough, score free Nik photo editing software and check out a $99 portable 3D printer that works with your smartphone!
Read full story