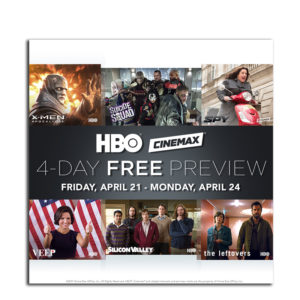 It’s a free HBO and Cinemax preview weekend! Tune in April 21-24 (yes, you get a looooonngg weekend) and check out new episodes of Vice, The Leftovers, Veep, and Real Time with Bill Maher – and tons of awesome movies too.

Here are some highlights:

HBO: The Immortal Life of Henrietta Lacks
Oprah’s latest movie premieres on Saturday. Henrietta was a poor black tobacco farmer whose cells—taken without her knowledge in 1951—became one of the most important tools in medicine, vital for developing the polio vaccine, cloning, gene mapping and in vitro fertilization. Her family reclaimed her story. Oprah and Rose Byrne star in this adaptation of the critically-acclaimed book.

HBO: VICE
Almost like mini documentaries, each episode focuses on two 15-minute stories (though “special editions” may encompass a single theme—like their recent one about NCAA basketball from both a player and university perspective). This week you can catch one about Life Under Sharia and “Plastic Oceans” and the newest show about the Fast Food of Arabia and Nollywood (the Nigerian movie industry). Editor’s note: I didn’t watch this series for a long time, thinking it would be too serious or boring, but boy was I wrong. Even if it’s not normally your type of show, I say give it a try!

HBO: Last Week Tonight
If you still miss John Stewart’s The Daily Show, you need to watch Last Week Tonight. John Oliver dishes out a half hour of biting and funny commentary about the state of the world and politics. Good stuff right here. You can catch an episode on Friday night, and the newest episode on Sunday.

HBO: The Leftovers
The third and final season of The Leftovers kicked off April 16. The series begins by jumping three years into the future, just a few weeks away from the seventh anniversary of that fateful day when 2 percent of the population disappeared. Watch Sunday nights. Here’s a preview of what’s to come this season:

HBO: Veep
This award-winning series started its sixth season on April 16 where Selina Meyer (Julia Louis-Dreyfus) struggles to say goodbye to her team, and boards her exit helicopter only to land shortly after, due to engine troubles. Arms folded, waiting for her motorcade, Selina listens to Laura Montez’s parade. Watch Sunday nights.

Other top movies to catch on HBO:

Cinemax: Warcraft
Based on the video game series, the movie shows the first encounters between humans and the orcs in the world of Azeroth. Travis Fimmel, Paula Patton, and Ben Foster star in this action-adventure/fantasy.

Cinemax: Death Race
Jason Statham, Tyrese Gibson and Joan Allen star in “Mad Max-eque” thriller. Inmates compete for their own freedom in a series of car races. (Note: showing before Death Race is another Jason Statham classic, “The Transporter”)

Other movies on Cinemax to watch out for:

If you like what you see this weekend, give us a call to keep enjoying HBO and Cinemax all year long (and then you’ll get access to all their on demand content too, so you can catch up on Game of Thrones, Westworld, The Knick, and more!).