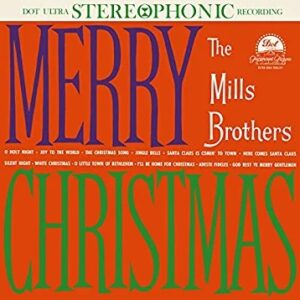 With Thanksgiving firmly in the rear-view mirror, it’s time for seemingly everyone’s favorite time of year—Christmas music season! While I will fully admit it’s not my forte, sometimes you’ll find me in the yuletide spirit and I’ll sing along to some carols. Let’s start with a lesser-known album and see where it takes us.

The Mills family lived in Piqua, Ohio, all the way back in the 1910s. Four brothers all showed an interest in music at a young age. Donald (born 1915, lead tenor vocalist); Herbert (born 1912, backup tenor vocalist); Harry (born 1913, baritone vocalist); John Jr. (born 1910, guitar, double bass, vocalist) sang in the church choir and took lessons at their grade school, eventually creating their own group. Initially they called themselves the Four Kings of Harmony, focusing on American jazz music and traditional (for the times) pop music (what exactly aughts and early tens pop music consisted of, I can’t say). Their dad was a barber and sang in his own barbershop quartet (who knew that was a real thing?). The boys would gather in front of their dad’s shop and sing to the community, but their big break came at an amateur contest at May’s Opera House. Harry realized he lost his kazoo and improvised by cupping his hands and mimicking the sound of a trumpet. That unplanned change was a hit, and they’d integrate that into their act.

Now, I hadn’t heard of these guys before, but they began calling themselves simply The Mills Brothers and, wouldn’t you know it, they made more than TWO THOUSAND recordings in their time. They’ve sold at minimum, fifty million albums and have three dozen gold records to their credit—crazy! Today I’m fixated on their holiday album aptly titled Merry Christmas, which hit shelves in 1959. No real information exists about the album in specifics. All I can say is, this is the absolute standard of the standards in terms of song choices. Obviously, they’re all done in that quartet style, mostly acapella with a little drum or light instrumental backing. Since this isn’t the type of music I would normally listen to, it’s a nice break and peak into something new. It comes across a bit Sinatra-esque I suppose, though I’m sure some would argue that’s a slap in the face to Frank.

I know I’m going backward on the timeline here, but the guys happened to be overseas when World War II broke out. They were in England and could only find a boat out to Australia so remained overseas for the next three years—truly incredible. The Mills Bros were all over the map, finding their way to South America at one point just seeking refuge. It was during that time another band, called the Ink Spots showed up on the scene, and the Mills Bros’ popularity declined. John Jr passed away around the time they got back to the states, and while the guys continued as a trio, things were never the same. After Harry passed in 1982, the two remaining brothers played until Herbert died in 1989. I’m going to look a bit more into these guys at some point, because their story truly seems fascinating.

Until then, toss this one on if you’re in the mood for some holiday cheer. It’s about the least offensive take on Christmas music I’ve ever done, so I can’t imagine anyone looking for holiday tunes would be disappointed. Merry Tuesday!