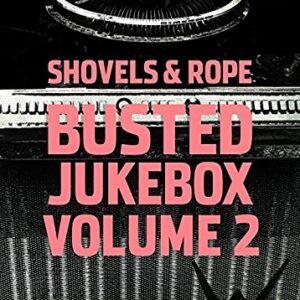 Cary Ann Hearst was born in Mississippi in 1979 but moved to Nashville, Tennessee in 1987. She lived there until attending College of Charleston in 1997 which is when she began performing music as a solo artist at local venues. Upon graduation, Hearst tried touring and even recorded some demos—but it was being asked to join other groups on stage for some vocal duets that changed the course of her history. While at a gig with bands like Caravan and Borrowed Angels, she took notice of a guy named Michael Trent. He was born in Houston but grew up in Denver—and oddly, moved to Charleston to perform with a band called The Films. The two connected, but ultimately each released their own solo album. In 2008, they decided to combine their talent and release an album together under the band name Shovels and Rope. It wasn’t intended to be a permanent act, but after getting married in 2009, their desire to keep going got stronger.

Shovels and Rope got signed by Dualtone Records in 2012 for their sophomore effort. They started to generate some real buzz, performing for David Letterman and ramping up to No. 21 on the Billboard 200 with their third studio record. Today I’m listening to their sixth studio album titled Busted Jukebox Vol. 2 which debuted in December of 2017 (for those not familiar: Vol. 1 was their fourth album and came out in 2015). This was the second release on new label New West Records.

Hearst and Trent’s goal was to create an album of lesser-known covers, but with help from well-known artists like Brandi Carlisle, Rhett Miller and John Moreland. The one that turned my ears inside-out was their rendition of Faith No More’s “Epic”. While the tune itself may not have been overly mainstream, the music video for it was iconic in the ‘90s. It was probably the first video that didn’t seem to have a ton of direction—or a point—but was so bizarre it was memorable. S&R’s version is a slowed down take, and it almost feels like Hearst is singing through the PA system at an old baseball stadium. Needless to say, I love it.

If you put this record on today, there is no doubt you’ll say, “this is definitely folk rock”—and you’d be right. But it’s got an updated feel to it. This isn’t necessarily Janis Joplin from the ’60s, but it has a quality akin to that for sure. Because of the collaborations, it almost has a feel of a holiday album or something like that. The vocals changing track to track isn’t something you hear very often, and it’s fun. Trent’s vocal in spots is almost haunting, which also adds to the album as a whole. So, while you say it’s folk—it’s folk that I don’t think I’ve heard before, and the song choices contribute to that as well. Since most of these are covers never really heard on mainstream radio, they don’t lend themselves immediately to their prior genre. I will say, however, that this album has a little bit of a country/soul feel to it, whether it was intended or not.

Shovels and Rope are still out there, grinding and making music today. In fact, their most recent studio release came out in February of this year. They have gotten some love from the American Music Association, being nominated for four awards, winning two. Hopefully that nudges you into giving them a shot, I think you’ll dig the different vibe.

FTC: This Hispanic Heritage Month, spot how scammers tell you to pay
How to lower your energy bill and avoid scams