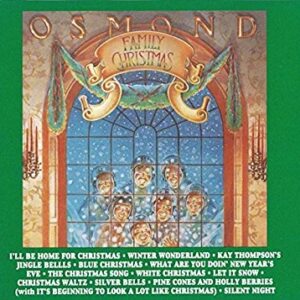 If the first two Christmas album entries were a bit too old school for your tastes, and last weeks was a bit too modern, this one should be squarely in your wheelhouse. Better yet, it’s from an artist that we’ve never discussed before here on STT, so that’s a double bonus! Just because I haven’t discussed them though, doesn’t mean you don’t know them—they are certainly a staple in U.S. culture and have been for a long time.

George and Olive Osmond were members of the Church of Jesus Christ of the Latter-day Saints. While residing in Ogden, Utah, they had nine children—Viri, Tom, Alan, Wayne, Merrill, Jay, Donny, Marie, and jimmy. Viri and Tom were born with severe hearing impairments, and ultimately would be the only two not to partake in the family band. In 1958, Alan, Wayne, Merrill, and Jay began a barbershop quartet of sorts, singing for local audiences around Ogden. That led to a local made-for-TV special called Inside the Osmonds, that explained they originally performed to raise money for hearing aids for their brothers and to serve as mission work for the church. In spite of the kids all being young (oldest was 9), George took them to audition for Lawrence Welk in California. Even though that opportunity didn’t work out as planned, they went to Disneyland and were discovered singing Disney tunes on Main Street. They were hired to perform, and which started the family legacy.

I’m fast-forwarding quite a bit because everyone mostly knows Donny and Marie. They would join up with the rest of the family, and the popularity of the Osmonds would skyrocket. Their first commercial album was released in 1970, with the last coming in 1979 due to Donny and Marie branching off into successful solo careers. But today’s featured album falls right before that chaotic split with the Osmond Family Christmas hitting shelves in December of 1976. The album peaked at No.127 on the Billboard chart, which may not seem like a major feat, but it was higher than their previous two efforts. This was released as a double album, consisting of a few original tracks, several traditional carols and then a few secular standards. All seven kids performed on the record, their first album to do so and what’s also kind of neat about this one, is that the musical style varies track to track. Some stuff is done with heavier instrumentals, some totally a cappella—it’s a bit all over the place, but in a good way. Since they’re mostly songs you know, the variety is appreciated.

From a review perspective, holiday music is all about cheer and family time. The family holiday spirit doesn’t get too much more on the nose than the abundance of Osmonds. If I were comparing this to Sia last week, it’s a major departure, and probably has more in common with the Mills Bros. or another older compilation album—but it has the signature Osmond sound, which apparently is a thing. I’m not quite old enough to appreciate the family and their impact on pop culture but after listening to this, it’s clear the family had talent, and didn’t seem to have the exterior baggage other musical families experienced. If holiday music isn’t wholesome enough in general for you, this one has your covered, in spades.

As my holiday album contributions close for another year, I want to say how thankful I am for all of you that take time to read and comment. I sincerely hope you enjoy this holiday season with those around you, and are able to unplug for your jobs, or whatever other stressors you have. Music is a great way to do that, and if you ever need any recommendations, I’m happy to help!