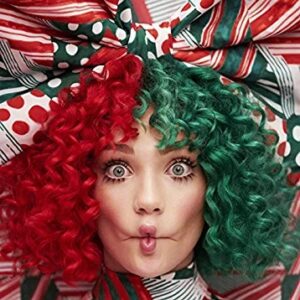 Over the last few weeks we’ve strayed way off the beaten path relative to holiday albums, so I think it’s time to center back with some more traditional tracks and artists. Today’s featured act is a major player in current pop music and, until today, I had no idea she had a holiday record. Let’s give it a whirl!

Not too long ago, we talked about Sia and her glacial rise to fame. While it took a while to find her footing in the music world, once she did, she has not relented. Since we covered her 2014 release, Sia has put out three more albums, including the one we’ll discuss today. She also has contributed to dozens of film soundtracks in that timeframe, including some of the biggest motion pictures of the recent past—Wonder Woman and Star Trek Beyond, just to name a few. Her prior acting experience has come back to the forefront as well, with Sia starring in several television episodes, while often still showcasing her singing chops. Her millions of albums sold in the last decade position her as one of the biggest stars in the world right now—but could she create a banger of a Christmas album?

Sia came out with Everyday Is Christmas in November of 2017. This was a bit of a change of pace, not only because of the subject matter, but it was Sia’s first release after signing with new label, Atlantic Records. From a listener perspective, it’s a bit unique as well. The original release had ten tracks of original Christmas tunes, which is not something you see very often. Sia herself noted the fun she had working on a holiday record, claiming she and the crew were “laughing at the end of each day”. Atlantic did everything they could to generate buzz too, which is also unusual for these types of albums. They pre-released a single and created music videos, one including mega-star actress Kristen Bell. The hoopla worked, as “Santa’s Coming For Us” reached No. 9 on the Billboard charts. Another single, “Snowman” would end up charting as well, causing Sia to make appearances on Ellen and The Voice to perform these new holiday standards.

The critical reception was a bit harsh, showing a normalized review of 59 out of 100. Some felt it was a bit inconsistent and underwritten—but how do you reinvent the wheel after generations of holiday tunes? Those critiques seem a bit too analytical to me. The goal of this kind of music is to put it on, decorate the house and do some shopping. It should put you in a good mood and in the Christmas spirit. I mean, there is a song called “Puppies Are Forever”—if that doesn’t make you feel good, you might need to check your pulse. Is it songwriting perfection? Of course not, but who cares? At a couple hundred thousand in total sales, this hasn’t exactly set the world on fire, but it’s a solid effort. Also, I appreciate not listening to the same old songs I’ve heard a million times presented in an ever-so-slightly different fashion, so extra points for that.

If you like Christmas music, you’ll enjoy this one for sure. Sia has an incredible vocal talent, and it truly shines through on the album. It’s only thirty-five minutes long too, so it might be a good album to toss on while you’re carting around doing that last-minute Christmas shopping. Note: If you get the most current version, three tracks have been added on the re-releases—something to look forward to!