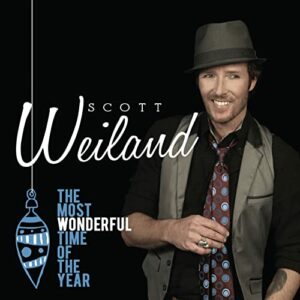 By Austin Krueger on December 7, 2021 in Online Life

Last week’s first holiday-themed post of the year was sure to put you in the Christmas spirit, quirky as it was—but when I found out today’s album existed, I will admit to being fairly excited. Despite that Christmas music isn’t typically my thing, I love the artist, and his bands have countless plays on my devices over the years.

Scott Richard Kline was born in October of 1967 in San Jose, California. At age five, his stepfather, David Weiland, legally adopted Scott and passed along his surname. Scott would then move to Ohio only to return to California as a teenager. I’ve talked about the pretty humorous story of Scott and Robert DeLeo bonding over the realization they were dating the same girl and subsequently forming Stone Temple Pilots (STP) before—and that band is really what put Weiland on the map. Between STP, Velvet Revolver, and a couple other makeshift bands—and despite his untimely death in 2015—Weiland’s music persists everywhere. With so many hits to his credit, you can’t go too many days without hearing something he wrote, but today’s entry doesn’t come from any of his bands—it’s Scott running solo.

The Most Wonderful Time Of The Year is a Christmas themed album that was formally released in October of 2011 and came about in a relatively interesting way. In August of the same year, after a few smaller side projects where he even attempted to produce his an album of his own work, Weiland released a bunch of covers exclusively through his website. They were so well received by fans, he decided to put out an actual album. This spawned the idea of using his iconic and unique vocal for a holiday album, so he went back to the studio. Unlike most seasonal recordings, this effort had some real backing. Scott went on a U.S. tour to support it and even created a couple music videos. Milwaukee, Wisconsin radio station WLUM-FM (102.1) even produced “A Very Scott Weiland Christmas” in which they played the album on repeat for 24 hours straight between Christmas Eve and Christmas Day.

You may be asking yourself, “Why this album over the billions upon billions of other caroling albums that exist?” And I’m not sure I have a great answer—unless you’re a huge fan of STP like I am. Weiland always had this incredibly identifiable voice, and to hear some of that on this album is such a different take on the standards you know and love. Truthfully, on a couple of songs his vocal seems a little too polished for my tastes because you could almost swear it was Tony Bennett singing instead of Scott. However, that almost is a credit to him and the true talent he possessed as a vocalist—even if he preferred to belt out those grungy, grunting tunes on stage instead of a classical sound. Don’t think this album is all a formality though because Weiland certainly put his spin on some of the iconic tracks. The arrangements vary and include one that added a reggae sound, and another has a beat you’d expect to hear in a hip-hop tune. I’d like to think Weiland was continuing to find his love of production and having fun in the studio—and that makes me smile.

Give this a shot today, but if it’s not for you then feel free to head on back to STP or Velvet Revolver to get your Scott fix. For me, this holiday album has given me a reason to check out some of his other side project work too, which he dabbled in in 1998 and 2008—just to see if anything can compare to the Mt. Rushmore work from earlier in his career. We have less than twenty days until the big day but, until then, Happy Tuesday!

FTC: Celebrate Hanukkah without the scams
The 20 worst passwords of 2021