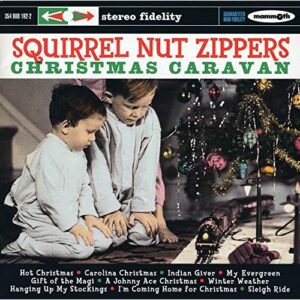 Sing it with me: it’s the most, polarizing time…of the year! Andy Williams parodies aside, I’m not talking about the holidays themselves, but the introduction of Christmas music into your preferred listening devices. While it’s not really my cup of tea, I know I’ll hear a ton of it over the next few weeks. Just as in years past, I’m going to embrace it and try to find some new stuff that I may enjoy.

Around 1993 in Chapel Hill, North Carolina, Jimbo Mathus and his then-wife Katharine Whalen founded a band. With four or five other members, they began playing local jazz shows and generating a bit of a following. Needing a name, “Nut Zippers” is a southern term for a variety of old bootleg moonshine. There happened to be a newspaper story about an intoxicated man who climbed a tree and refused to come down even with police presence. The headline was “Squirrel Nut Zipper” and the band loved it. It’s also a brand of caramel and peanut candy, but they claim no relation to that. Around that time in music history there was a bit of a revival of swing music and the Zips were one of the bands who made it popular again. It’s almost a shame that I’m not featuring them in their natural musical habitat—but maybe in an odd way, I actually am? One day I’ll catalog one of their actual swing records, because they’re delightfully different—but a holiday album that is equally delightfully different will have to do for now.

Somehow, the eclectic act got an invite to perform at the 1996 Summer Olympics in Atlanta, Georgia and at President Clinton’s second inaugural ball. While they were riding high on those performances, a holiday album titled Christmas Caravan hit shelves in October of 1998. While on the surface this transformation may not make a ton of sense—it’s important to note the swing revival was fully over by this point, and the band was struggling to find their footing. This album isn’t at all a nod to their launching pad, but simply a collection of holiday music that feels closer to 1950’s pop/rock than anything else.

Unlike most yuletide albums, Christmas Caravan consists mostly of their own material, and not just regurgitated standards done in a unique style. I really appreciate that. Even their best-selling album wasn’t one that sits in the millions—so they knew something quirky like this wasn’t likely to generate a ton of sales either. But it was just like them to put something out that no one else was really doing at the time. And listening to it today, it has a very classic feel to it, something I’d have not expected from them either.

Because of the unconventional nature of this album, there aren’t a lot of critical reviews from the record or even a lot of information on it at all. Basically, the band convinced the label to do it, and their wish was granted because their top album “Hot” had exceeded any and all expectations. A couple critics seemed to enjoy the new material and subtle jokes about the holidays and the general reverence for the time of the year. Others seemed to really want “White Christmas” and “Jingle Bells” done in the Zips’ swing style, so they were disappointed. You do get one fun take on “Sleigh Ride” that’s solely an instrumental version with enough instruments featured to fill an airplane hangar, so feel free to skip to track five if that’s what you’re into. But if you’re into an album of good, new, holiday songs to have on in the background at your next party, this is a great fit.

Surprisingly I’m glad I threw this one on today. It definitely put me more into the spirit and I might even decorate my house tonight. Of course, I’ll have Christmas Caravan on again, this time blaring over my sound system instead of my headphones. Squirrel Nut Zippers have been on/off many times over the years—but give this one a shot today. It might just be my new favorite in their discography.

FTC: Before you join that crowdfunding campaign, read this
FTC: Celebrate Hanukkah without the scams