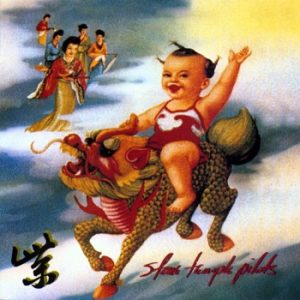 Sadly, Cheap Tunes Tuesday could probably be a weekly blog about not only well-priced albums, but also about artists who passed before their time. Today’s band was a major part of the grunge revolution and if not for drug and alcohol abuses within the band, potentially could have been one of the best rock acts of the 1990’s.

Back in 2014, I wrote about the interesting story of Scott Weiland and Robert DeLeo’s first meeting and subsequent friendship. I won’t focus again on how the band was formed, but will instead tell you what happened after. Core was a smash hit and Stone Temple Pilots (STP) toured all over the U.S. with their revered three-month tour. In 1993 the band filmed an episode of MTV Unplugged, offering an acoustic version of their hits on Core, as well as the debut of a couple tracks from a soon-to-be recorded album. Critics were impressed, with Rolling Stone hailing them as the Best New Band and winning Favorite Rock New Artist at the American Music Awards. In March of 1994, they took home a Grammy for Best Hard Rock Performance and their star really could not have been any brighter.

Wanting to capitalize on the buzz, Stone Temple Pilots went back into the studio to work on their sophomore album Purple which would be released in June of 1994. Recording was complete in less than a month and quickly spawned a couple radio-friendly singles. After only four months, Purple had sold over three million copies. While the album still was mostly within their grunge roots, you could find elements of psych rock in a couple tracks, and perhaps the most popular single “Interstate Love Song” had a bit of a country/blues vibe to it.

Critics felt the album was not only as good as Core, but one wrote, “Purple is a quantum leap over Core, showcasing a band hitting their stride.” The reception since has been outstanding too, making all sorts of “All Time” lists and iconic album countdowns. For sales, it sits around 12 million worldwide, their second highest selling album. Tracks from the album would go on to be used all over ads and TV/film. Perhaps the biggest coup was two tracks in iconic film The Crow, exposing a new audience to the band.

STP was such a solid act in that time and you can hear the talent Scott Weiland had not only in his vocal ability, but his songwriting. Perhaps it’s best showcased here on Purple, where the tracks are possibly a bit more subtle, instead of the huge rock effort put forth in Core.

After Weiland passed of an accidental drug overdose on his tour bus in December of 2015, many artists came out and offered evaluations of his career, with Billy Corgan calling him one of the three “voices of the generation” alongside Kurt Cobain of Nirvana and Layne Staley of Alice in Chains. These first two records are very high on my personal best of lists, and it’s a shame the band couldn’t push aside their demons to keep making quality tunes. STP and Weiland produced three more records between 1996 and 2001, but none of them had the same feel and quality of the first pair.

Stone Temple Pilots forged on after their breakup with Scott Weiland utilizing Linkin Park front man Chester Bennington for a couple years. They amicably parted ways in late 2015 and Bennington also recently passed away in July of 2017. As of a couple weeks ago, the band stated they’re looking into another vocalist and said they’ll be working on new material shortly. I applaud them for going on, but it’ll be hard to recapture the magic they had in the ‘90s. Give yourself a boost today with Purple, only $5 bucks; you’ll save a pretty penny.