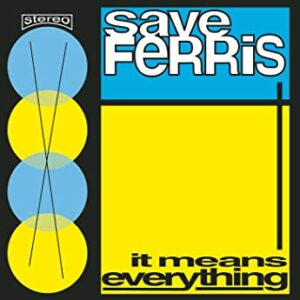 Raise your hand if you enjoy music. Anyone? Anyone? Bueller? Today’s featured act is one of those peppy, upbeat bands that you can’t help but succumb to. They’ll get your toes tapping and make your two-hour drive feel like ten minutes. Let’s dive in!

Back in 1995, a band came together in Orange County, California and began working under their own independent label. They started booking shows around Southern California getting a great underground response and following. They dropped an EP called “Introducing Save Ferris” in 1996—the band’s name stemming from the iconic ‘80s film. Perhaps the band’s biggest break came when lead singer Monique Powell got a chance to provide vocals on a Reel Big Fish tune called “She Has A Girlfriend Now” which sold millions of copies. It was exposure that could have taken a decade for Save Ferris to otherwise get. Riding that wave of support, Save Ferris quickly became one of the most requested bands on SoCal radio stations—including KROQ’s “Rodney on the Rock” segment. Save Ferris is believed to be the first unsigned band to make an appearance on that popular piece.

The National Academy of Recording Arts and Sciences gave Save Ferris a Grammy showcase award for ‘best unsigned band’ which ultimately led to a contract with Epic Records in 1997. The label wanted them to put out a commercial release in pretty short order, so they re-released tracks from the EP, added some new stuff, plus a cover. It culminated in their debut album It Means Everything hitting shelves in September of 1997. Three singles from the album were all over the radio over a two-year run. Perhaps the biggest was “Come On Eileen”—a cover of the Dexy’s Midnight Runners ‘80s megahit. But one single was featured in “The Big Hit”, a film starring Mark Wahlberg, and the same single was also used in the trailers for the film “Senseless” starring Marlon Wayans. Save Ferris music was also featured in Thomas and the Magic Railroad and the TV series 7th Heaven. All in all, a very wide array of new potential fans and exposure to a pretty new band.

Save Ferris went on a long tour to promote the new album. They opened for some pretty major acts at the time, including Sugar Ray, The Offspring and the aforementioned Reel Big Fish. They were even invited to the Vans Warped Tour in 1998 and 2000. While the album only sold about half a million copies in the states, Save Ferris continued to be featured in television shows and movies—likely because of their upbeat fun-loving style, I think.

They’re pretty much that stereotypical ‘90s ska band that, even if you don’t know them, you’ve heard them. Powell’s vocal will certainly remind you of Gwen Stefani—if you close your eyes and listen, you’d swear this is a No Doubt release (and I don’t mean that as a criticism, because if you read that post, I adore that particular album). But there isn’t anything inherently fresh about what Save Ferris was doing then—it was simply fun music that had a very wide likeability base.

Today’s post came about because I heard one of Save Farris’ later singles on a tribute album for the band Sublime. They performed a cover of “Santeria” on it, and it truly caught my ear. If you don’t feel up for an entire ska album today, at least give that cover a shot. But this is worth it as well, if nothing else for a plethora of ‘80s flashback references. Happy Tuesday!