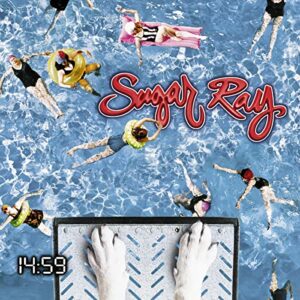 Music can most certainly have a profound impact on our daily lives. It can shape your mood or provide a soundtrack to some of you finest moment. But other times, it’s just background to get through the day. Today’s group is fun and catchy, sometimes that’s all you need to strive for.

A group of guys—Mark McGrath, Rodney Sheppard, Murphy Karges and Stan Frazier— grew up together in Orange County. Sheppard played in a number of reggae bands, including one band with Frazier called The Tories. When that group disbanded, they added the other two guys and called themselves Shrinky Dinx. From the ‘80s into the ‘90s, they were threated with a lawsuit from Milton Bradley who made the toy by the same name. As a result, Sugar Ray was born and a deal with Atlantic Records was inked.

Around 1995, Sugar Ray released their debut album, but it failed to produce one hit single. They did start to get some recognition inside some alternative music circles though, and many felt confident they would taste success. Enter summer of 1997, when their song “Fly” would hit commercial radio. It was a major departure from their normal sound, but it was unquestionably one of the biggest hits of the year. Piggybacking on the success of the single, their sophomore album would go on to sell a few million copies—but critics were loudly skeptical on if Sugar Ray was simply a one-hit wonder.

Their third studio release, 14:59, came out in January of 1999. Leaking the lead single “Every Morning” a week early, the album debuted in the top 20 of the Billboard 200. The band realized the money is in making music with a more radio-friendly sound. This album was intended to be thirteen tracks of hopefully fun songs they could make money on. Overall, the sound is pretty all over the board. There are elements of alt rock, but mostly pop—but with a sprinkle of punk and metal too. Because of the up and down nature of the record, critics were either inspired or baffled by the effort. Some concluded it was simply a “guilty pleasure” type of album, but all agreed it wasn’t one that was going to be up for a Grammy Award or anything of that nature.

The album title itself might be good enough reason to purchase this today. The 14:59 references the quintessential fifteen minutes of fame, with the band just that close to having theirs expire. Incredibly clever. And as it turns out, it was pretty close to being true. While the album sold nearly ten million albums worldwide, Sugar Ray never came close to matching those types of numbers again.

Rather than fighting it, they embraced the nature of their fame and that they’re commonly referred to as a nostalgia act. They will go around and play the local fairs, getting paid modest amount of money—but really being enjoyed by their dedicated fans and people only looking to get a kick out of hearing the old hits. They tried other things in between then and now, but ultimately, that mentality has kept them going for almost 30 years.

From my perspective, they hit the nail on the head. I’ve played a lot of music for a lot of people—it’s rare anyone demands some Sugar Ray. But when a hit like “Every Morning” comes on, we all sing and have a great four minutes.

Mark McGrath has been everywhere since the advent of Sugar Ray. He’s turned into an actor, host and major radio DJ. Hopefully he takes care of his former bandmates with all that fame. In that sense, he can always right the wrongs foooooor me—and everyone else. Happy Tuesday!