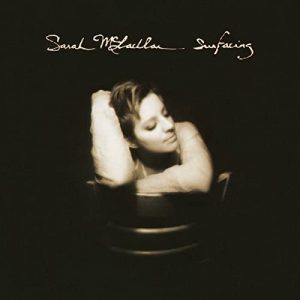 A little deeply held secret about me—in addition to loving music, I love animals. I have two yellow labs and would adopt a million dogs if I could make the logistics work. Why is that coming up? Because today’s featured artist is not only an advocate for animals, but her featured track might be synonymous with asking for help.

Sarah Ann McLachlan was born in January of 1968 in Nova Scotia, Canada. Her birth mom gave her up after she was born, and the McLachlan family took her in and eventually legally adopted her. Like most artists, she got started in music early. Sarah played the ukulele at age four and began studying guitar, piano and taking vocal lessons shortly after. While in high school, she fronted a band called The October Game and you can still find a single or two out there on an independent label.

While the group was short lived, that very band allowed Sarah to get noticed. Their first ever concert was at Dalhousie University in Nova Scotia. A label exec was so impressed by Sarah, they offered her a deal on the spot. Her parents insisted she finished high school first, and complete one year of college before embarking on the journey. Two years later, at age 19, Sarah signed on the dotted line before having written a single song herself.

While just about everything she did was a critical and commercial success, things got taken up a peg (or ten) with the release of her fourth studio effort titled Surfacing, which dropped in July of 1997.

It would hit No. 1 on the Canadian charts and No. 2 on the Billboard 200. The album spawned four commercial singles—three of them remain staples on easy listening stations to this day. McLachlan won several awards as well, including the Grammy Award for Best Female Pop Vocal Performance. Sales were fierce and steady and she has sold 10 million just in the U.S., and millions more worldwide. This was the first of Sarah’s albums to see such reach. She charted in the U.K., Australia, and the Netherlands too.

In reference to the opening paragraph, the single “Angel” is featured on this album. Used in an ad for the ASPCA, it has essentially become the soundtrack for abused and mistreated animals. Is that a good thing? And how effective has it been? Great questions, loyal reader!

Her work with the ASPCA, backed by the iconic single, has raised over $30 MILLION for the charity. This type of response is why you’ve seen her ads not only frequently, but on such prime-time opportunities as the Super Bowl. From her perspective, it’s opened doors for her otherwise would likely have remained shut. It’s exposed her to millions of fans of various television shows or sports—and if one thing can unite those varied interests, its animals. Sarah advocates for all of them, no matter what species and genus.

In my research today, Sarah is also one of the most philanthropic artists I’ve ever come across, which alone should be enough for all of us to listen to her tunes today. She’s won so many awards, was awarded an honorary Doctor of Laws degree and is in the Canadian Walk of Fame. Oh, and she founded this small concert called Lilith Fair, maybe you’ve heard of it? She’s amazing, and her voice is too. Give McLachlan’s Surfacing a shot today, it’s worth your hour. May you find some comfort here. Happy Tuesday!