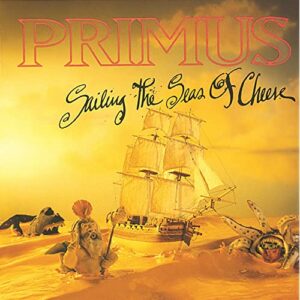 By Austin Krueger on September 7, 2021 in Online Life

If a band doesn’t fit into the standard genre conventions it doesn’t mean they should be overlooked for great tunes. In fact, bands with an eclectic sound are some of the best out there. Today’s featured act is, well, out there—but the few tracks I’m familiar with I’d stack up against almost anyone. I’m excited to hear more!

In 1984, singer/bassist Les Claypool and guitarist Todd Huth formed a band in El Sobrante, California. Initially they used a drum machine because they struggled finding a human being to fill that gap. Fortunately, Les’s buddy Vince Parker returned from a stint in the army and the trio recorded their first demo—financed by Claypool who had sold his car. They were using the band name Primate until, about a month later, a group called Primates threatened legal action and issued a cease and desist. Primate was changed to Primus and they were on their way.

The drummer position ended up being a rotating chair of people. Primus went through several guys in that spot, but that didn’t stop the group from getting some serious notoriety on the local scene. By 1987 Primus took a break until they suddenly returned back on the scene a year later with Claypool and two new members—guitarist Les LaLonde and drummer Tim Alexander. Finally, it seemed the three people in the band were the right mix, and they dropped a live album from one of their concerts at Berkeley.

When the 90’s struck, Primus was catching some breaks. Their debut album hit shelves, Kirk Hammett from Metallica helped the guys out by being in a music video, and Primus was on tour opening for Jane’s Addiction. Their popularity was growing so feverishly, Interscope Records took notice and signed the band to a deal. Today I’m listening to the sophomore effort, Sailing The Seas Of Cheese that hit shelves in May of 1991.

Led by three commercial singles released over about twelve months, the album hit the top 100 of the Billboard charts. Primus was also known for music videos on MTV as eclectic as their sound. It took a bit of time, but the album is certified platinum in the U.S. and has sold nearly five million copies worldwide to date. One of my favorite critical reviews is from AllMusic, which states, “it completely redefined the possibilities of the electric bass in rock music for those who’d never heard the group before.”

So, what makes the group so out there? It’s sort of hard to put into words—but I’ll give it a shot. The music itself is very riff heavy, which is pretty awesome if you’re into pure rock or metal. Claypool’s vocal is a bit quirky, as he has a very southern accent with a humorous embellishment. The band’s attitude toward making music appears to be willfully goofy, which some people may find off-putting, but fans of the band can’t get enough of. And proof of their success is in the proverbial pudding. Lead single “Jerry Was a Racecar Driver” saw, putting it modestly, some success. It’s been featured in several video games including Tony Hawk’s Pro Skater and Rock Band—but also in well-known television shows like HBO’s True Detective. Fans of horror film might recognize a sample from the movie Texas Chainsaw Massacre 2, when the character Chop Top exclaims, “Dog will hunt!” Stuff like that really did broaden their fanbase and appeal.

After another hiatus, where Alexander left and returned, Primus is still out there making music today. The most recent album was recorded in 2017, but occasionally you can hear Primus at your local venue. I’ve never had the privilege of seeing them live, but I hear their alt/funk metal sound still hits hard today. Perhaps Primus never won no checkered flags, but they never did come in last. Enjoy and happy Tuesday!