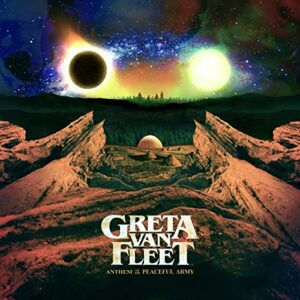 Not sure about you guys, but when I hear about a new band first, there’s always a bit of excitement when I appreciate the sound and then tell my buddies about it to see if they enjoy too. This could be you with today’s featured act. This group is playing at one of my local venues on March 22, 2022, so if you’re near Madison, Wisconsin take a hard listen today and see if you think they’re worth seeing live.

In 2012, twin brothers Josh and Jake Kiszka formed a band with their younger brother Sam and friend Kyle Hauck near Frankenmuth, Michigan. Kyle came up with the band name Greta Van Fleet after hearing a relative mention a local resident named Gretna Van Fleet. The actual person blessed the moniker and thinks the group is talented, even though she indicated in a later interview that her namesake music isn’t her taste. Jake had been creating guitar riffs since 2010 so the band had a little something to start with. Although Kyle had to depart the band in 2013, he was replaced by another good friend so Greta stayed busy making music and trying to catch fire. In 2014, they recorded a live EP in one take—which led to a single being featured in the Detroit area for a Chevy Equinox ad.

While they were doing shows, grinding, and trying to get the attention of a label, Greta did a live performance of the single “Highway Tune” which was featured on Showtime’s Shameless in 2016. The following year, the studio version was put in iTunes as Greta’s first released single on the service. Their debut studio EP released in April of 2017—with Apple naming them an ‘artist of the week’. That publicity landed them a tour opening for a band called The Struts, and Loudwire naming them ‘best new artist’. After another EP later that year, they opened for Bob Seger on two tour dates and, during the second show in November, they announced their first studio album was almost done.

Anthem Of The Peaceful Army hit shelves in October of 2018. Elton John caught wind of the band and had them perform at his Academy Award party. Elton even joined them on stage to perform his single “Saturday Night’s Alright for Fighting” and Greta’s “You’re the One”. He recommended Greta get more flamboyant on stage and dramatic with their performances—something they took to heart. The album sold nearly 100k copies the first week and opened at No.3 on the Billboard 200. They were certainly doing something right.

If you’re like the two people who were with me when their Madison concert announcement dropped, you’re asking yourself, “who are these guys?” and “what kind of music do they play?” And I’d say the answer is a little complicated. This album is officially listed as hard rock, but that’s not an apt description whatsoever. Their sound is more blues rock/folk rock but also a bit poppy in spots? All I know is Greta is an enjoyable band to listen to. I’ve been familiar with this album for a while, and it’s one I to go back to on occasion. It’s very laid back, and an easy one to toss on—and good enough to boot to be nominated for four Grammy Awards, winning Best Rock Album. I’ve read comparisons to them and Led Zeppelin—which I’m not sure I fully support—but what I hear is a little Rush at times. Josh’s vocal comes across my headphones a little like Geddy Lee, and that’s nothing but complimentary.

Greta Van Fleet put out a second studio album in April of this year—one that now I’m excited to get to. But for today, I’m really impressed with Anthem and definitely recommend you give it a listen. I might even buy tickets to their show in March, because they feel like a real up-and-comer act. Happy Tuesday!

Give thanks for a HBO and Cinemax free preview!
Hallmark Christmas movie bingo 2021