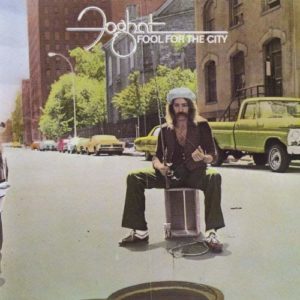 It’s 2018. If I started talking to you about a band that formed in 1971, you’d likely think they had their time in the sun and faded into the night at some point. While they may not be the household name of a Rolling Stones or Beatles, today’s featured band is still going strong. With tens of millions in sales worldwide, they’ve made their mark on the industry.

In late 1970, three guys were irritated with their band’s lack of success and decided to start over. Pulling a guitarist from another group, they formed a new four piece group calling themselves Foghat. It was just a nonsense word for a game the vocalist played with his little brother as kids. With the group being fairly young and inexperienced, they signed with a small London based label to release a record. It didn’t sell much, but critically folks felt they had some potential—even the spunk to maybe make U.K.-based radio.

A year later they did a very odd thing—released their second album with the same exact title as their first (simply, “Foghat”). Many were confused about whether this album was just a re-release or if it had new material so sales were poor. It also didn’t quite have the same vigor behind it and it appeared that perhaps the band was destined to hang around the small time. 1974 saw the band release two more albums, both to little or no fanfare.

It was 1975, they hadn’t gotten out of London and they didn’t have much going for them. One of the founding members left the band and the death spiral seemed imminent. The group decided to release one more album, Fool For The City in September of ’75. The tiny label from the U.K. also didn’t have high expectations, but then something crazy happened. Lead single “Slow Ride” hit major radio and the band skyrocketed. The single would hit number 20 on the U.S. Billboard 200 and the album reached platinum status in a fairly short amount of time.

Part of the album’s intrigue was the album cover which featured the drummer sitting next to an open manhole on a busy street in New York City apparently fishing in the sewer. The story goes this was done randomly, as the drummer hadn’t gotten any sleep and “just wanted to go fishing.” The police stopped him and asked, “You got a fishing license?” The humor quickly ended and he was arrested. The band was shocked, onlookers were shocked (featured on the back cover), and it was one amazing story.

This is just one of those bands you know, but don’t really know. Everyone knows “Slow Ride” and probably a couple of their other bigger hits—but they’ve steadily been making music for five decades. Infamous drummer Roger Earl is the only member still going strong, but they released an album in 2016 and put out a live recording last year.

In terms of this particular album, it’s probably not on the Mount Rushmore of iconic records, but it’s solid. If you’re looking for that 70’s signature rock sound, this has it in spades. Dave Peverett’s vocal is definitely a highlight as well—when he hits the screaming high notes on tracks, that’s something you didn’t hear much at the time. People will remember it for the hits, but all seven tracks flow well and it’s an easy listen.

Foghat’s catalog was bought up by larger labels and this album has been remastered and re-released twice since the 70’s. I haven’t seen Foghat live, and I’m not entirely certain how frequently and widespread they get around anymore, but give this one a shot today on your headphones. At six bucks, you’d be a fool in any city not to pick this up and rock out.