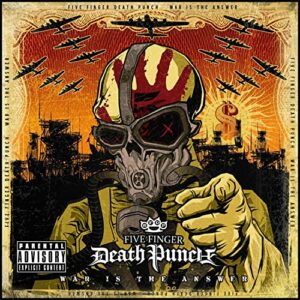 During my weekend adventures, I ran into a loyal Cheap Tunes Tuesday reader—and they gently reminded me to get back to reviewing a little heavy metal here and there. When I pressed for an album, the one they suggested had actually been requested by three different readers. While they’re not really a band I’m too familiar with, I’m eager to dive in with all the hoopla.

Zoltan Bathory (what a name!) and Jeremy Spencer were in a band called U.P.O. in 2004. It didn’t seem like it was working out, so the duo split off and formed Five Finger Death Punch (FFDP) in 2005. Bathory came up with the name from classic martial arts cinema, a similar variation featured in Quentin Tarantino’s “Kill Bill” series. It would take until 2006, but the duo eventually found a bassist and vocalist to complete the group. From there, things moved pretty fast and furious for FFDP. Their debut record came out the same year, but they also went through more lineup changes, signed a new record deal, and began working on a new EP to entice fans. In 2007 FFDP were invited to the illustrious “Family Values Tour” put on by popular metal band Korn. Without a doubt, that opened their potential fanbase exponentially and gave many existing metal heads an insight to a new, up and coming group with some potential.

With all trends pointing upward for the band, their second studio release was fairly anticipated within the genre community. War Is The Answer hit shelves in September of 2009 and entered the Billboard 200 at a shocking No. 7 and sold 50k copies the first week. The biggest change was production, with FFDP utilizing the services of Kevin Churko who worked previously with greats like Ozzy Osbourne and Metallica. Bathory remarked, “we’ve continued the journey we started on the first album, so there’s a healthy balance of melody and aggression…” All of their intentions and planning worked, as the album has sold a few million copies worldwide to date—their best-selling album so far in the discography.

Upon listening this morning, I realized there is one track I’m familiar with in multiple facets. They added a cover of the tune “Bad Company” by artist Bad Company—and this process became a staple on most FFDP commercial releases going forward. They would add their darker interpretation of a former heavy standard and if you are a loyal reader, you know my love of a cover. Bonus points in my book.

There were an astonishing six commercially released singles from this album that all charted in some capacity. “Far From Home” has been used in several television shows and movies, perhaps most notably Criminal Minds on CBS. Critically, the album is a little mixed and all over the board, but that’s pretty typical of harder metal releases. Some people get it, some don’t. This particular brand of ‘shouty’ metal in spots isn’t always my bag, but when I’m in the mood I can really jam to it. I do enjoy the few changes of pace on the album though—and it makes me feel like FFDP happily explores a range that most metal bands simply won’t, in fear of being referred to as “sell-outs”. I haven’t read that about this particular band, so perhaps because they came on the scene having a range, they didn’t change their sound just to sell records.

Since War’s release, the band has undergone several more lineup changes, including original member Jeremy Spencer—but they have persisted. FFDP has dropped six more studio albums since 2009, with the most recent out in 2020. I like this one enough I’ll check out a couple more soon, and especially take note of their covers on subsequent records. Happy Tuesday!