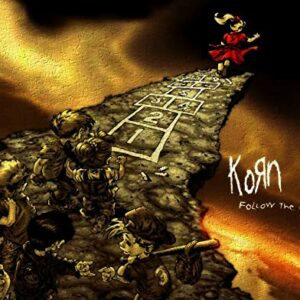 Forty million is a lot. No matter what you’re referring to, if you said you had that many of something, I’d be impressed. Today’s featured act has sold that many albums in their history, and yet may not be a band that you’re overly familiar with—and, added bonus, this one came in as a request from a loyal reader! Let’s dive in.

In the late ‘80s, three members of the band L.A.P.D were looking for a change of scenery. They enlisted the help of guitarist Brian Welch and singer Jonathan Davis and called their new group Korn. Originally, “corn” was suggested and quickly rejected, but one of the members had the idea of spelling it with a K and a backwards R—the latter stemming from the logo of former retailer Toys R Us where many of the band members had previously worked. Davis designed the logo and they were on their way.

The band rented a studio in Huntington Beach, California just to practice, and the sessions were so well received crowds started to gather outside. While playing local gigs, they got noticed by an A&R rep that signed them to a demo deal—but it was a total flop. That misstep only sharpened Korn’s resolve, and they began opening for no pay with bands like Biohazard and House of Pain.

In Oct of ‘94 they released their debut album to decent success. The follow-up in Oct of ‘96 was similarly received, and the band seemed to maybe be plateauing. Their third album was going to be their make-or-break, hit it big or head to the back of the line effort. Follow The Leader was released in November of 1999 and completely changed the band’s course.

It would debut at #1 on the Billboard 200 and sell nearly 300k copies the first week. The MTV program TRL was huge at the time, and the video for “Freak On A Leash” was in heavy rotation, introducing the band to a more pop music audience. The video was also so popular they when a Grammy Award for it in 2000. Sales were sparked by Korn being a part of the Family Values Tour, which consisted of some of the best hard rock bands and hip-hop artists touring the USA. Five singles would end up reaching the commercial charts over the course of twelve months, and the album to date has sold nearly ten million copies worldwide.

Korn wasn’t your father’s hard rock or heavy metal. They really pioneered the nu metal genre, and certainly were the first to get the modern music into the mainstream. Critically Follow the Leader received nearly positive marks across the board. Some enjoyed the rage aspect of the record, referring to it as the ideal record for those long, dark days. Others simply enjoyed the dumb fun of the album and credited the band for their genre-bending material.

For me, this came out at a time when I was very big into the metal category. Korn wasn’t like the other bands I was listening to at the time. Groups like Pantera, System Of A Down and Metallica were crushing it, but they were cut from the molds of the modern take of classic metal. Korn was introducing many rock die-hards to hip-hop artists and making them revisit their harsh stances against not only rap, but virtually any other genre. Korn would go ahead and scream in your face but follow that up with some slow bagpipes on the very next track. It was their diversity and willingness to explore that made them something different and unique in a genre that didn’t often compromise their roots.

While Korn never had a follow-up quite as successful as Follow The Leader, their next couple albums were also at minimum platinum certified by the RIAA. They’re still out grinding, playing shows around the world and their most recent record was released in 2019. I’ve already seen the light, maybe you will too if you check this out today. Metal heads unite!