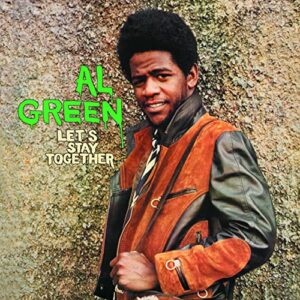 Holidays are a great time to revel in music. While I’ve typically had a focus around the Christmas holidays on the blog, it’s important to note there is often an album or two dedicated to whatever special day you’re celebrating. Valentine’s Day is no exception, with several romantic albums to share with that special someone.

Albert Leornes Greene was born in April of 1946 in Forrest City, Arkansas. He was the sixth of ten children and his dad was a sharecropper while his mom took care of the household. Going by Al for short, he began performing for his sister in a group called ‘The Greene Brothers’ around age ten. His family would relocate to Grand Rapids, Michigan in the late ‘50s, where Al was kicked out of the house in his teens. The reason? He was caught listening to R&B music—namely Jackie Wilson—and his devoutly religious father was having none of it. Having nowhere to go, he lived with a prostitute and began using/selling recreational drugs. He joined a vocal group that would not only record a demo but get a song on the charts. Hi Records liked what they heard with Al and signed him to a solo deal.

His debut was released in 1967 without a ton of fuss. His second and third releases saw improvements over his first, but only marginally. It was Al’s fourth studio effort titled Let’s Stay Together released in January of 1972 that shot so high it was like rockets were strapped to its back for a trip around the moon. It went all the way to No. 8 on the pop albums chart and No. 1 on the soul charts—and stayed on top for three months.

Critics adored the album, saying how Green’s vocal was unlike anything they had heard before. “He can croon, shout, scat, rise to the smoothest falsetto and throw in the funkiest growls.” The title track was the only commercially released single, but several of the tracks would end up becoming staples for not only Al, but soul, pop, R&B radio for decades to come. It may surprise you to learn the album is only certified Gold by the RIAA—but that was merely a sign of the times. This brand of music simply wasn’t part of the mainstream at the time, and part of the reason the respect for Al as an artist only increased as time has gone on. While Green would move into gospel recordings for several years, he returned to secular music in the late ‘80s. Nothing was as popular as his classic hits, but they’ve maintained a level of success to this day.

Let’s Stay Together has been a track associated with romance in every level of media imaginable. It’s been featured on countless television shows, ads, movies, and even video games. There is a short list of artists that have been staples of Valentine’s Day-esque celebrations, and Green might be the iconic face of it all. His 21 Grammy award nominations (11 wins) and several well-known tracks would tell you his legacy certainly isn’t over, but likely to carry on with generations to come as well. There’s Marvin Gaye, James Brown, and Al Green—the absolute staples and almost creators of modern soul music.

No matter if you give the gift of flowers, jewelry, or chocolates this Valentine’s Day, don’t be afraid to mix a little Al Green in there too. Whatever you want to do, is all right with me. Happy Tuesday!

Big Game trivia: answer for an opportunity to win!
How to never miss an Olympic moment with TDS TV+